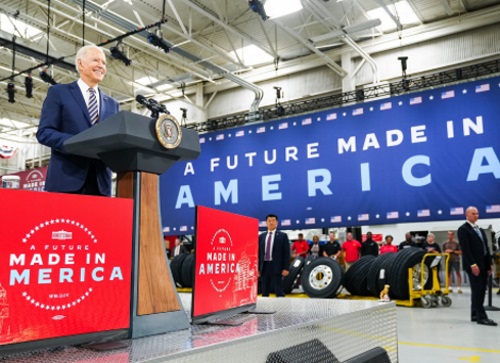 After lengthy negotiations over the past month, a group of 21 Senators – comprised of 10 Republicans and 11 Democrats – and the White House reached a deal on July 28 regarding the bipartisan $1.2 trillion Infrastructure Investment and Jobs Act or IIJA. The IIJA then successfully passed a cloture motion 67 to 32 later that day, with 17 Republicans voting yes along with all 50 Democrats to formally open debate on that bill.

“This deal makes key investments to put people to work all across the country – in cities, small towns, rural communities, and across our coastlines and plains,” noted President Joe Biden in a statement.

“As the deal goes to the entire Senate, there is still plenty of work ahead to bring this home,” he said. “There will be disagreements to resolve and more compromise to forge along the way.”

According to analysis by the American Association of State Highway and Transportation Officials, the IIJA bill contains more funding and policy detail compared to the initial two-page infrastructure investment “framework” released in late June.

“These bills were also developed with input from our fellow senators and incorporated policy and funding priorities from both sides of the aisle,” she said.

“We recognize this long-sought agreement is a crucial demonstration of the solid bipartisan support for infrastructure investment including roads, bridges, public transit, passenger rail, ports, airports, safety, and resilience—as well as broadband, water, and energy systems,” he said. “We are particularly grateful for the addition of $550 billion in new funding on top of the much-needed five-year surface transportation reauthorization bills passed with strong bipartisan support by the Senate Environment and Public Works and Commerce Committees.”

Tymon added that AASHTO and its state department of transportation members “stand ready to work with Congress and the Administration toward enactment of this major infrastructure package as soon as possible.”

While the full legislative text of the ILJA is not yet available, a fact sheet released by the White House provides an overview of the new funding it contains: