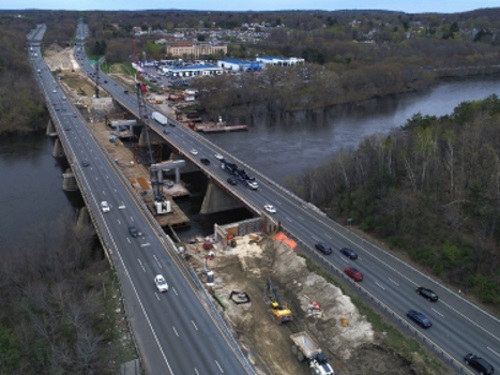 George Mason University researchers are using “statistical methods” to study the possible factors that may influence the exposure of commuters to air pollutants – factors such as frequency, time, and duration of commute.

Building on a study of 46 women’s exposure to PM 2.5 over a 48-hour period using personal air pollution monitors, Krall’s new research “clustered commuters” to determine whether these clusters were associated with traffic pollution exposures.

Her on-going research seeks to distinguish between similar sources of traffic pollution, such as pollution generated by brake wear or from tailpipe emissions, and to develop statistical methods to better estimate exposure to pollution sources.

As COVID-19 infection rates decline in most areas of the country and employers weigh whether to continue work-from-home policies, studies such as this provide important insight into the role that daily commutes can play in personal air pollution exposure and the public’s health, she explained.

“This is one of the first studies to utilize in-vehicle monitoring, specifically on-board diagnostics data loggers, to understand real-world commuting behaviors for environmental health,” said Krall,

“Linking these data with personal air pollution monitoring allowed us to better understand how commuter characteristics are associated with sources of air pollution exposures,” she noted

Krall stressed that current research cannot definitely determine whether modifying commutes – such as by avoiding highways or commuting outside of rush hour – lowers traffic pollution exposures for commuters. “More research is needed to determine what changes would be effective to lower exposures,” she noted.

Several state departments of transportation are involved in projects that seek to alter commuting habits as a way to reduce air pollution, among other things.

For example, the District Department of Transportation launched its goDCgo program in Washington D.C. over a decade ago – a program that promotes sustainable travel options to help reduce traffic, stress on infrastructure, and air pollution.

Established in 2010, goDCgo focuses on increasing awareness and building support for sustainable travel options, such as transit, walking, biking, and carpooling to destinations across the nation’s capital.

Through outreach and community engagement, the District DOT said the program has made a “substantial impact” in changing commuter behaviors and helping businesses contribute to Washington D.C.’s sustainability goals.

That included helping 313,000 people shift to a “clean commute,” decreasing traffic by eliminating 120 million single-occupancy vehicle trips, and eliminating 357,000 tons of carbon dioxide from the air, the agency said.