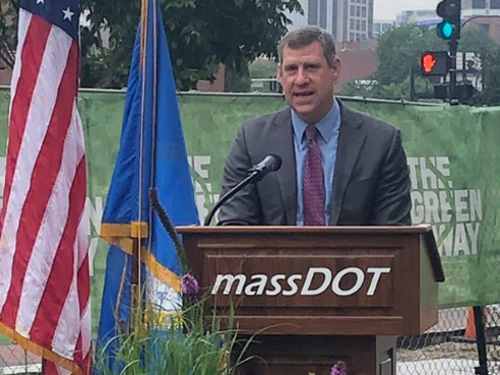 Governor Charlie Baker formally appointed Jamey Tesler (seen above) on July 27 as secretary and CEO of the Massachusetts Department of Transportation. Tesler has served as acting secretary since January, replacing Stephanie Pollack after her appointment as deputy administrator of the Federal Highway Administration for the Biden-Harris administration.

“Jamey Tesler is a dynamic leader and with several years of experience in senior roles in the transportation sector,” said Gov. Baker (R) in a statement. “From safety to planning for the mobility needs of the Commonwealth’s future, the job of transportation secretary is hugely important and Jamey is the right person to lead the department.”

“Since January, it has been the honor of my professional career to serve as acting secretary of transportation and I am grateful and humbled … to continue to lead the organization as we deliver a transportation system that is safe, reliable, resilient and equitable,” Tesler said.

“With the support of MassDOT’s dedicated workforce and management team, I am looking forward to continuing to advance customer service improvements, programs giving municipalities resources, and infrastructure projects which connect people with where they want to go, whether they are walking, bicycling, traveling by public transportation, or riding in a vehicle,” he added.

Tesler most recently served registrar of motor vehicles for the Massachusetts DOT. He also served as the agency’s chief operating officer, chief of staff, and assistant secretary for procurement. Tesler has also worked for the Massachusetts Bay Transportation Authority and for former Governor Jane Swift’s legal office and the office of the state treasurer.