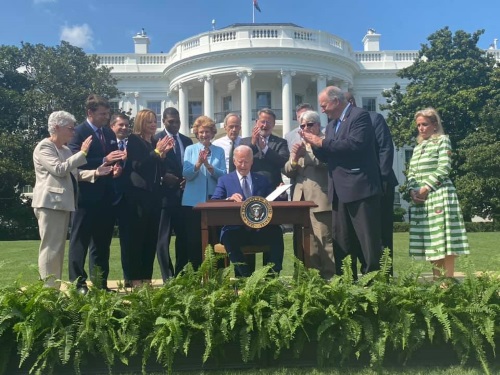 The National Highway Traffic Safety Administration and Environmental Protection Agency announced a plan on August 5 to mandate an 8 percent annual increase in fuel efficiency for passenger cars and light trucks between model year 2024 and 2026.

[Above image via the Office of Senator Debbie Stabenow]

That dovetails with an executive order issued by President Biden the same day calling for 50 percent of all new passenger cars and light trucks sold in 2030 be zero-emission vehicles, which includes battery electric, plug-in hybrid electric, or fuel cell electric vehicles.

The agency said it also plans to develop similar fuel efficiency mandates for medium- and heavy-duty vehicles beginning as early as model year 2027.

NHTSA said those new fuel economy standards would increase the estimated “fleet-wide” fuel economy average by 12 miles per gallon for model year 2026 relative to model year 2021. Those standards would also close a $140 billion “gap” in fuel savings for new vehicles sold by 2030, which the agency projects would increase to $470 billion by 2050, reducing greenhouse gases by 1.8 billion tons over the next three decades.

NHTSA estimates that total benefits from the new proposed standards will exceed program costs by $132 billion.

NHTSA noted the fuel economy standard revision is in response to an executive order issued by President Biden in January. That order called for a review of the Safer Affordable Fuel-Efficient or SAFE Vehicles Rule for model years 2021-2026 passenger cars and light trucks issued by NHTSA in March 2020 under President Trump’s administration. NHTSA began withdrawing parts of that rule in March of this year.

“I’m doing so … with the support of the auto industry,” he added. “Importantly, we have announcements today from automakers representing nearly the entire auto industry market who have positioned around the ambition that 40 to 50 percent of all vehicles sold by 2030 in America being electric. This is a big deal.”