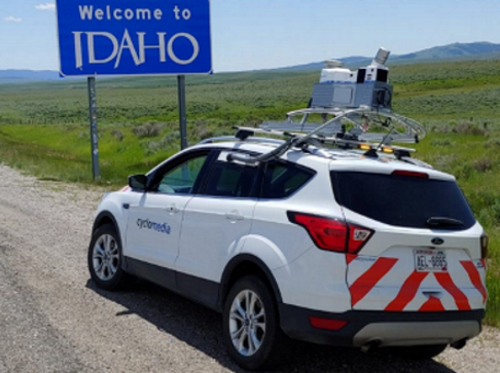 The Idaho Transportation Department is working to digitally record and catalogue a statewide inventory highway “assets” that includes signs, guardrails, American’s with Disabilities Act-compliant ramps, sidewalks, among other items.

[Above photo via the ITD]

Dubbed the “Statewide Asset Attribute Inventory” or SWAAI, it will eventually encompass all of the assets within Idaho’s 12,000-lane-mile state highway system.

“Basically, before SWAAI, ITD simply didn’t have inventories of its key highway assets,” explained Nik Sterbentz, a GIS analyst working in the agency’s District 5 office, in a statement. “In order to be accountable to taxpayers and those doling out funding and resources, that needed to change,” he said. “It opens the door on a multitude of possibilities for ITD to do better business.”

Sterbentz – who is “spearheading” this collaborative project for ITD – noted that without reliable information on highway assets, a data-driven approach to decision-making is frequently impossible, resulting in rushed, anecdotal, costly “ad hoc” solutions.

ITD started this digitization project nearly two years ago, based in part on a series of “need-gathering” discussions held with the agency’s district and headquarters personnel. ITD ultimately selected Cyclomedia Technology to gather highway asset data via Light Detection and Ranging or LiDAR and other roadway imagery.

Using automated technology, Cyclomedia collected that asset data in eight months according to ITD’s specifications, delivering it to the agency by March 2021.

Now, ITD said its staff as well as agency partners can use not only the extracted asset inventories – comprised of nearly 700,000 individual GIS features – but also 360-degree panoramic roadway imagery underlaid with LiDAR data, ensuring measurement accuracy to under an inch at any point along Idaho’s highways.

“It’s an opportunity for ITD to identify and implement numerous new, innovative practices and build on its legacy while proving its willingness to be open to revolutionary new improvements,” Sterbentz said.