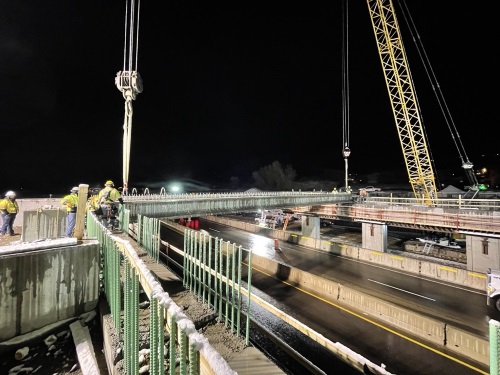 The Utah Department of Transportation recently opened the first new interchange built as part of the $225 million widening of U.S. 89 to six lanes, three in each direction: a three-year project that should be finished by 2023.

The new 400 North interchange improves the connection between U.S. 89 and 400 North in Fruit Heights – a major east-west connector through Davis County. Drivers on U.S. 89 will no longer have to stop as 400 North now crosses over the highway, Utah DOT said: improving safety and travel efficiency for motorists.

“Opening this new interchange is a huge step forward in completing this massive project,” explained Rob Wight, Utah DOT’s Region One director, in a statement. “Each new bridge represents one less stoplight for drivers, which means reduced delays and fewer crashes, and getting on and off the highway is much easier.”

At the same time the new interchange opened, the agency closed all access between Nicholls Road and U.S. 89 as works crews construct a new Nicholls Road bridge over the highway; anticipated to be complete in 2023.

The 400 North interchange is the first of four new planned interchanges between Farmington and Layton that seek to replace existing intersections with on- and off-ramps and bridges to carry local streets over U.S. 89. Later this summer, two more of those interchanges should open; giving northbound drivers on U.S. 89 a nine-mile stretch of highway with no stoplights.

Other improvements to the local transportation system include a three-mile extension of Gordon Avenue and a new frontage road system along the highway to preserve access to local neighborhoods.