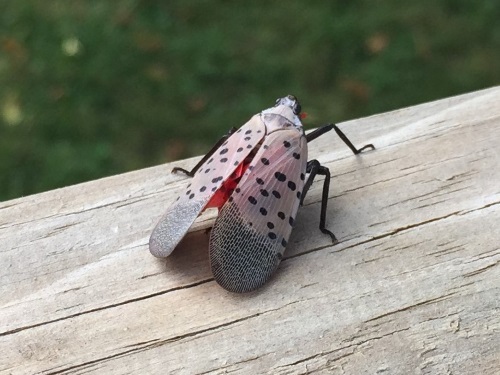 The spotted lanternfly – formally known as “Lycorma delicatul” – is not actually a fly, but an exotic and invasive sap-feeding plant hopper that feeds on more than 70 species of plants. The preferred “host” of the spotted lanternfly is a plant known as “tree-of-heaven” or “Ailanthus altissima,” which itself is highly invasive and abundant along highways, in urban areas, and along the edges of agricultural and industrial areas.

The agency said in a statement that the concern is that the feeding of spotted lanternfly nymphs and adults on sap from trees and vines weakens the entire plant, while the excretions from these leaf-hopping insects encourage the growth of black sooty mold, thereby reducing photosynthesis.

As a result, agricultural crops face reduced yields due to the lanternfly’s feeding on fruit and generally weakening plants, if not destroying them outright.

The agency also noted that during the months of August through November the adults of this pest can attach themselves or “hitch hike” on vehicles and trailers, so it is asking travelers to check their vehicles for the lanternfly, and – if found – to take a picture, destroy the insect, and report it to the Connecticut Agricultural Experiment Station.

State departments of transportation across the country are regularly engaged in a variety of efforts to beat back invasive insect and plant species.

For example, Kentucky Transportation Cabinet highway crews engage in an annual effort – usually at the beginning of March – to control the spread of invasive plant species that can damage transportation infrastructure as well as interfere with motorist “line-of-sight.”

Such efforts sometimes involve usual tactics, as well. For instance, the California Department of Transportation launched a pilot project in February 2020 that used 300 goats for nearly a month to help remove invasive non-native weeds such as bur clover, mustard, and thistle from a 20-acre site adjacent to Highway 1 just north of the Piedras Blancas Lighthouse.

Instead of relying on herbicides, Caltrans said the goal of this project is to deploy a “more sustainable approach” to revitalizing the native coastal prairie adjacent to a highway realignment project originally completed in 2017.