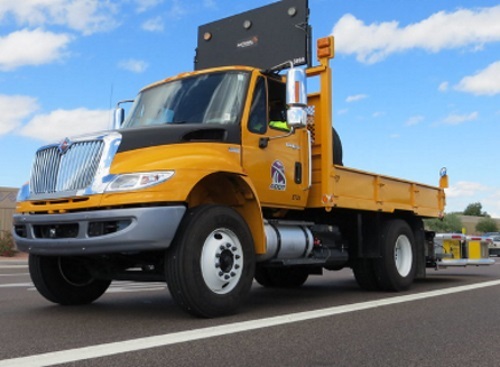 The Arizona Department of Transportation is deploying a truck protection device designed in-house to collect metal debris along highway shoulders before it punctures the tires of the agency’s work vehicles.

The device – called a “pokey picker upper” by the agency – is a magnet attached via a three-foot bar to the front of an ADOT maintenance truck that hovers just above the ground collecting metal debris.

Designed by Timothy Mitchell – a highway operations supervisor for the Arizona DOT’s Quartzsite Maintenance Unit – the device is interchangeable and thus easily moved to either the passenger or the driver side of the vehicle.

“When we were doing regular spot litter removal, the number of flat tires we were getting was so high, we needed to come up with a way to reduce that waste,” Mitchell said in a statement.

The Arizona DOT said its crews began using this new tool a year ago to great effect and since then, a welder in the Quartzsite Maintenance Unit shop has improved upon the prototype.

While its maintenance crews are still compiling data for the number of hours and costs related to the flat tires, they have noted that trips to the shop have dropped considerably, the Arizona DOT said.

Previously, they were trekking to the shop two to four times a week for tire repairs; now, after introducing the “pokey picker upper,” trucks are suffering flats only about two to three times a month, the agency noted.