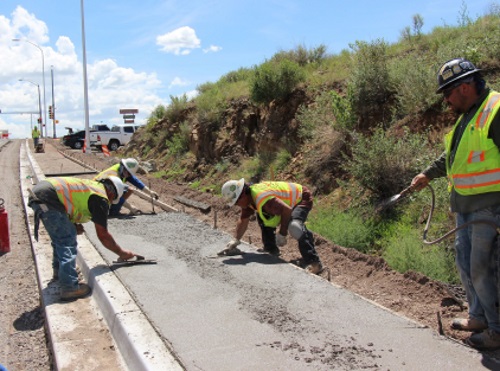 [Above photo by the New Mexico DOT]

“We must take action and the department is committed to making pedestrians safer in New Mexico,” explained Transportation Secretary Mike Sandoval in a statement. “Comprehensive pedestrian safety isn’t just a governor’s priority, it isn’t just a NMDOT priority – it’s a country, state, county and city priority.”

For example, while a report issued by the Governors Highway Safety Association showed pedestrian fatalities trended up in the first half of 2020, that same report also noted how several state-directed efforts are successfully improving pedestrian safety.

GHSA’s annual Spotlight on Highway Safety report found that the U.S. pedestrian fatality rate increased 20 percent in the first six months of 2020 as speeding, distracted, and impaired driving – as well as other dangerous driving behaviors – increased during the COVID-19 pandemic.

Yet that report also found that pedestrian fatalities during the first half of 2020 declined in 20 states and Washington D.C. compared with the same period in 2019. Meanwhile nine states – Alabama, Florida, Hawaii, Kentucky, Massachusetts, New York, Oklahoma, Pennsylvania, and South Carolina – witnessed double-digit percentage and numeric declines in pedestrian fatalities in the first six months of 2020 compared to the same six-month period in 2019.