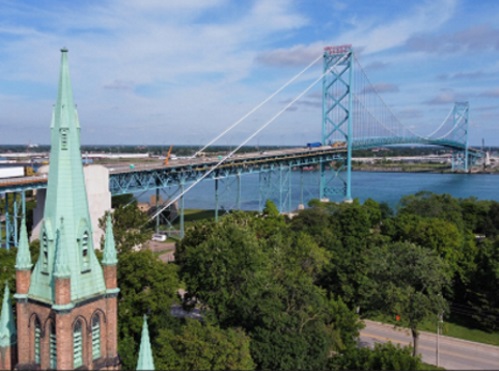 Researchers at the University of Windsor are upgrading a network of cameras and sensors on the Canadian side of the Ambassador Bridge as part of a five-year $206,000 project that aims to improve predictions for border traffic volumes while also improving safety.

[Above photo via the Canadian Transit Company]

If successful, those researchers said they could expand the project to include similar traffic volume simulations for the $5.7 billion Gordie Howe International Bridge, expected to open in 2024.

“We’re trying to understand how traffic moves through this major node,” said Maoh in a blog post. “Collecting data in real time is critical for any meaningful analysis.”

This latest project uses machine learning and artificial intelligence to measure and predict traffic patterns, thus improving the efficiency of border crossings. The camera/sensor network transfers data regarding traffic flows near the bridge wirelessly and in real time to servers at the institute for analysis by a team of researchers from a variety of disciplines.

Traffic sensors in place right now measure the number and size of vehicles, Maoh said. This project would collect additional data on factors such as lane changes, vehicle speed, and the interaction of large trucks and smaller passenger vehicles.

That data that would not only assist truckers and local motorists, but could also improve air quality for local residents, improve the supply chain operation between Canada and the United States, and increase the competitiveness of manufacturers and the transportation industry, he added.

Computer simulations based on that collected data could also improve the “interaction” between cars and trucks; building computer models that would alter stoplight timing and speed limits to improve traffic flow while also improving safety.