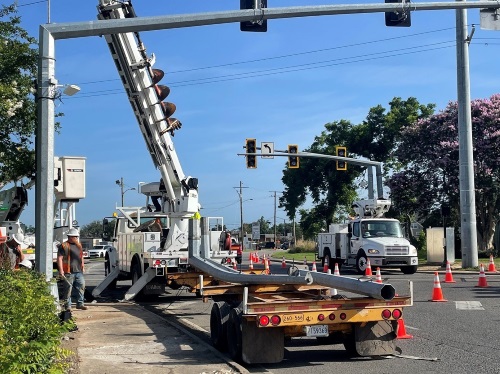 Numerous short- and long-term economic and quality-of-life benefits are poised to flow from the $1.2 trillion “Infrastructure Investment & Jobs Act” or IIJA passed by the Senate on August 10, according to a survey of state departments of transportation conducted by the American Association of State Highway and Transportation Officials.

That survey polled state DOTs from across the country as to how the proposed policy and funding outlined in the IIJA would help them improve the safety, efficiency, and productivity of the transportation systems they manage.

[Jim Tymon, AASHTO’s executive director, recently provided an overview of the IIJA’s potential benefits in a recent “On Time With Tymon” video interview.]

The agency added that the IIJA would enable Connecticut to repair and rebuild our roads and bridges and invest in major projects with safety, equity, resiliency, and sustainability at the core – especially by bringing the Northeast Corridor, as well as Connecticut’s other railroad assets, into a state-of-good repair while advancing Governor Ned Lamont’s Time for CT Rail Plan.

The Arkansas Department of Transportation noted that not only would the infrastructure bill provide funding stability for the next five years, it would also increase Arkansas’ share of federal funding by approximately $200 million annually.

“This funding, when combined with $300 million in additional funding recently authorized by the state legislature would be used to expand or accelerate the ‘Renew AR Highways’ program,” the agency said.

The Louisiana Department of Transportation and Development said the IIJA would deliver $6 billion over the next five years to Louisiana, enabling the state to close the gap in funding major projects and allowing it to advance several much-needed major road and bridge projects affecting urban and rural residents.

“The agriculture, petrochemical, and tourism industries will greatly benefit from additional road and bridge repairs that will improve the condition of the existing system and remove load-postings,” the Louisiana DOTD emphasized, while allowing the agency to address resiliency issues for triple the miles of roads repeatedly inundated with water annually.

“Other areas in which the IIJA will benefit Louisiana are the expansion of our Highway Safety Program helping to decrease fatalities and serious injuries,” the Louisiana DOTD noted. “The IIJA also presents opportunities to improve our public transportation infrastructure such as commuter rail and the rapid development of the network of electric vehicle charging stations.”

The Florida Department of Transportation noted that the proposed infrastructure bill would bring more than $16.3 billion in transportation funds to the state near term. “It makes significant progress on overall funding and wisely uses the existing formulas,” the agency stressed.

“Florida’s levels of federal formula highway funding is expected to increase by over $600 million per year to about $2.6 billion annually or $13.1 billion over the five-year life of the bill,” it added.

The Florida DOT pointed out that every mode of transportation would benefit from the IIJA, noting that it provides $180 million per year for the next five years for airport improvement funding and $2.6 billion for transit needs. Also, and with more discretionary funding available, it well positions Florida’s 14 active deep-water seaports to pursue and capture additional federal resources, the agency said.

The Oregon Department of Transportation said the IIJA would provide about $1 billion in additional highway formula funding for Oregon over the next five years: a nearly 40 percent increase in federal investment to preserve and improve roads, bridges, bike paths, and sidewalks statewide.

On top of that, it provides more than $50 million in funding for the installation of electric vehicle charging stations along with $82 million for a new carbon reduction program to help achieve Oregon’s climate commitments.

The Illinois Department of Transportation pointed out that the IIJA provides a “once-in-a-generation opportunity” to enhance, modernize and transform the multimodal infrastructure system for both Illinois and the nation as a whole.

“They include projects with national, regional and local significance, such as the CREATE rail program, passenger rail expansions, bridge reconstructions and repairs, roadway maintenance, and transit system electrification,” it added.

For Montana, the IIJA represents a nearly $170 million annual increase for its transportation programs, according to the Montana Department of Transportation – supporting jobs, economic opportunities, and improving safety of the traveling public.

“Safe and effective transportation systems are crucial for supporting the economic viability and quality of life in rural states,” the Montana DOT said. “The IIJA formula-based approach recognizes the need for increased investment in aging highways and bridges and provides funding stability which will allow us to make the most optimal investment decisions in preserving and protecting our transportation infrastructure.”

“This bill allows for five years of funding stability for highway, transit, and passenger rail programs, with a large share of the Highway Trust Fund support provided directly to the state departments of transportation that keep our communities moving safely and efficiently,” added AASHTO’s Tymon in a statement.

“AASHTO and its members also applaud the creation of a formula-based bridge and electric vehicle infrastructure funding program, substantial action to address climate change and improve system resiliency, and improvements to the project delivery and environmental review process—all important priorities for state DOTs,” he said.