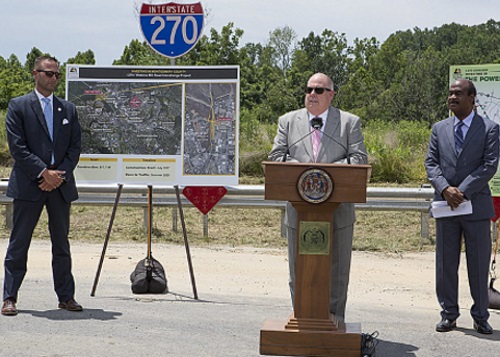 The Maryland Department of Transportation recently released a draft of its fiscal 2022-2027 Consolidated Transportation Program or CTP; a $16.4 billion six-year capital budget that is $1.2 billion higher compared to the $15.2 billion final FY 2021-2026 CTP released in January.

[Above photo by Maryland GovPics]

That beefed up budget reflects an increased focus on transportation system preservation while supporting statewide economic recovery from the COVID-19 pandemic, explained Greg Slater, Maryland DOT secretary (seen at left in above photo).

“This approach to infrastructure investment allows us to maintain a state of good repair and be ready to quickly move projects into construction with any new federal transportation funding,” he said in a statement.

Preserving aging infrastructure represents more than half of Maryland DOT’s proposed $16.4 billion capital budget, Slater said – funding critical to bring roads, bridges, rail, port and airport facilities, and other infrastructure into a state of good repair. It also sets aside $6.8 billion for transit, $1.1 billion for ports, $885.2 million for aviation, and $112.7 million for the state’s Motor Vehicle Administration.

The Maryland DOT added that while travel on the state’s transportation system dropped to historic lows early in the COVID-19 pandemic, travel volumes have returned to – and in some cases even surpassed – pre-pandemic levels in 2021.

By the second week of August, Maryland highway traffic recovered to nearly 82 percent of the volume recorded during same period in 2019, with truck volumes 8.2 percent higher compared to the same period in 2019. During the peak of stay-at-home orders in 2020, traffic volumes dropped more than 50 percent, the agency said.

Volume at Maryland toll facilities recovered to nearly 89 percent of the volume experienced during the same period in 2019. By contrast, during the peak of the stay-at-home orders in 2020, transactions on Maryland’s toll roads and bridges dropped 58 percent.

While passenger travel at BWI Thurgood Marshall Airport remained 26.5 percent lower during the second week of August compared to same period in 2019, BWI passenger had crashed by more than 95 percent during the height of the pandemic.

While Maryland transit ridership remained 50 percent lower by the second week of August in comparison to the same period in 2019, that is an improvement over the 77 percent drop experienced during the peak of the stay-at-home orders in 2020, the agency said. Finally, Port of Baltimore freight container volumes were up 10 percent in June 2021 compared to June 2019.