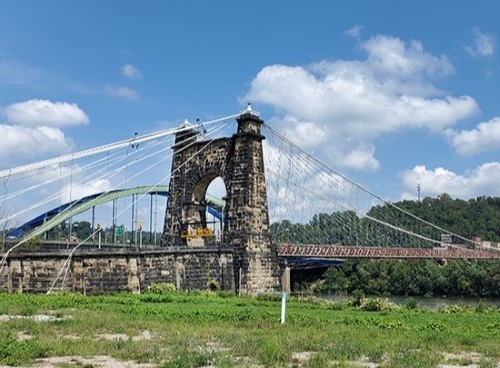 The West Virginia Division of Highways – part of the West Virginia Department of Transportation – recently awarded a nearly $18 million contract to repair and rehabilitate the historic Wheeling Suspension Bridge (seen above) located in Wheeling, WV.

[Above photo by the WV Governor’s Office]

The contract calls for to Advantage Steel & Construction, LLC, to repair the historic bridge’s superstructure and substructure, replace any damaged suspension cables, renovate lighting, and clean and paint the span.

“This bridge is a landmark piece of our state’s history, and I am fully committed to doing all we can to preserve it for generations to come,” noted Governor Jim Justice (R) in a statement. “Through our work on this project, we will restore the bridge back to its historic beauty so it can continue to connect the great community of Wheeling to the world for generations to come.

The 1,300-foot span – which originally opened in 1849 – connects the city of Wheeling with Wheeling Island. Originally part of the National Road – the first major improved highway in the United States that ran from Maryland to Illinois – the Wheeling Suspension Bridge served as a “main passageway” to the West.

WVDOH closed the bridge to vehicle traffic in September 2019 after a tour bus that far exceeded the posted two-ton weight limit tried to cross, only to be stuck under a barrier. Contractors will repair and renovate the bridge in hopes of reopening it to motor vehicle traffic, noted Jimmy Wriston, deputy commissioner of highways.

“This bridge is an icon,” he said. “Being able to preserve that structure is important, not only to the city of Wheeling but to the state as a whole.”