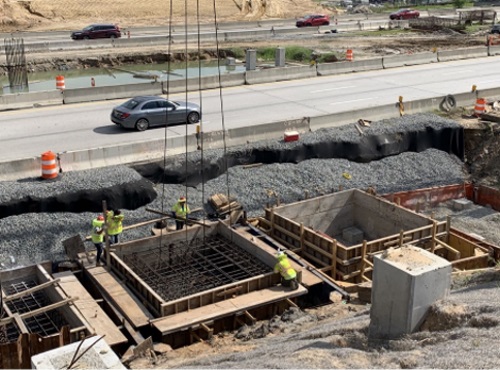 An 81-page analysis of the $1.2 trillion “Infrastructure Investment & Jobs Act” or IIJA passed by the Senate on August 10 and now winding its way through the House of Representatives finds it aligns with key principles espoused by the American Association of State Highway and Transportation Officials.

[Editor’s note: the House’s Ways and Means Committee recently finished marking up the “Build Back Better Act,” which rolls together the $1.2 trillion IIJA into a total proposed package of $3.5 trillion in fiscal year 2022 federal spending.]

[Above photo by the Georgia DOT]

Second, the bill improves the environment review process for transportation projects by “touching up” on Section 4(f) of the National Environmental Policy Act or NEPA while streamlining stewardship and oversight agreement, among others. “We believe that with improved procedures, especially concurrent, coordinated decision-making, we can greatly expedite project delivery without reducing environmental protections,” noted AASHTO in a letter sent to the President’s Council on Environmental Quality  in March 2020 regarding NEPA; subsequently overhauled by a final rule issued in July 2020.

Third, the bill provides substantial funding to build out electric vehicle or EV infrastructure while also increasing research and development funding for EVs as well, to the tune of $7.5 billion. That supports a key AASHTO principle of ensuring that state departments of transportation maintain the ability to harness innovation and technology.

“The bill allows for five years of funding stability for highway, transit, and passenger rail programs, with a large share of the Highway Trust Fund support provided directly to the state DOTs that keep our communities moving safely and efficiently,” noted Jim Tymon, AASHTO’s executive director, in a statement issued upon the bill’s passage by the Senate in August.

“AASHTO and its members also applaud the creation of a formula-based bridge and electric vehicle infrastructure funding program, substantial action to address climate change and improve system resiliency, and improvements to the project delivery and environmental review process – all important priorities for state DOTs,” he stressed.

[Editor’s note: Tymon recently provided an overview of the IIJA’s potential benefits in a recent “On Time With Tymon” video interview.]

A recent state DOT survey conducted by AASHTO highlighted the numerous short- and long-term economic and quality-of-life benefits poised to flow from the IIJA if Congress passes the measure.

That survey polled state DOTs from across the country as to how the proposed policy and funding outlined in the IIJA would help them improve the safety, efficiency, and productivity of the transportation systems they manage.

“This legislation has the potential to bring billions of dollars to a state that has a large and complex transportation system spanning from the mountains to the plains, urban to rural, and sun to snow,” noted the Colorado Department of Transportation in AASHTO’s survey.

“[Our] state’s population is growing rapidly, straining our aging infrastructure. This growth has emphasized the need for improved multimodal options to decrease congestion and combat greenhouse gas emissions,” the Colorado DOT said. “The provisions in the IIJA that improve and encourage the use of EVs will help Colorado reach goals identified in a statewide greenhouse gas reduction plan.”

“The increase in highway formula funding will allow [us] to advance critical projects sooner, including safety improvements to save lives, corridor widening to relieve congestion, and new by-passes to redirect the ever-growing volume of freight out of downtown areas,” the Georgia Department of Transportation noted.

“The IIJA includes significant investments to strategically improve the movement of freight from increasing funds to replace local bridges to creating new programs to replace at grade railroad crossings with grade-separated crossings – improving safety and providing much needed relief to small and large communities plagued with persistently blocked crossings,” the agency said.

“Further, increases to formula transit funding to Georgia will be transformational as Georgia continues its all of the above modal strategy including innovative bus rapid transit paired with the state’s growing system of managed lanes providing Georgians with a choice on how best for them to commute,” the Georgia DOT added.

“The IIJA allows Kansas to continue to offer the federal fund exchange program providing many smaller cities and rural counties to make transportation improvements they otherwise might not be able to do,” explained the Kansas Department of Transportation. “For example, projects like county road and bridge improvements vital to the movement of Kansas agricultural products to the marketplace are representative of the projects funded through our exchange program.”

“By building on and dramatically increasing funding of existing programs, the IIJA recognizes and bolsters the vital partnership between the federal and state governments,” added the Massachusetts Department of Transportation. “The Act also creates numerous other opportunities for states and municipalities to seek discretionary funds for projects and priorities that may have been out of reach at previous funding levels.”