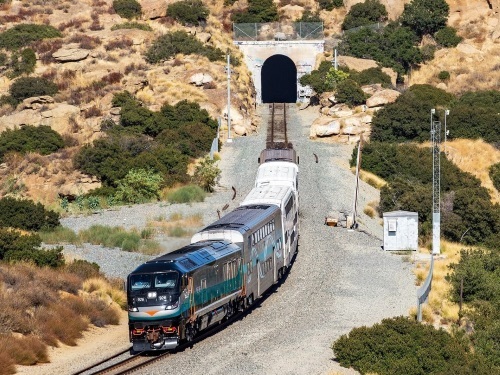 The California Department of Transportation and the U.S. Geological Survey (USGS) are helping Metrolink – Southern California’s commuter rail system – pilot test new detection technology to ensure the safe and rapid slowing and stopping of trains in the event of an earthquake.

[Above photo by Metrolink]

The Earthquake Early Warning System uses data from the USGS-operated ShakeAlert network to alert Metrolink’s positive train control or PTC system that an earthquake has occurred. Following that warning, Metrolink’s PTC system – initially designed to prevent train-on-train collisions, over-speed derailments, incursions into established work zones, and other dangerous situations – would slow and stop trains in the affected areas, it said.

The warning system should also provide enhanced data to support inspection of the rail network and resumption of service following an earthquake, the rail operator noted.

Metrolink – which consists of seven railroad lines and 62 stations operating on 534 miles of track – said it is initially testing this on the 91/Perris Valley Line between the cities of Perris and Riverside. It added that this earthquake detection system has been in use by San Francisco’s Bay Area Rapid Transit or BART – a heavy rail elevated and subway public transportation system – for over a year.

[Editor’s note: BART said the system is working well to the point where it renewed its agreement with USGS in 2020 to continue using ShakeAlert data as part of the earthquake early-warning system for its trains.]

Metrolink noted that it expects to expand the use of this earthquake detection system across its entire network if the initial tests are successful.

“This program is another initiative by Metrolink to move technology forward in a real-world environment to help protect our riders and crews and reflects our position as a leader in rail safety,” said Metrolink CEO Darren Kettle in a statement.