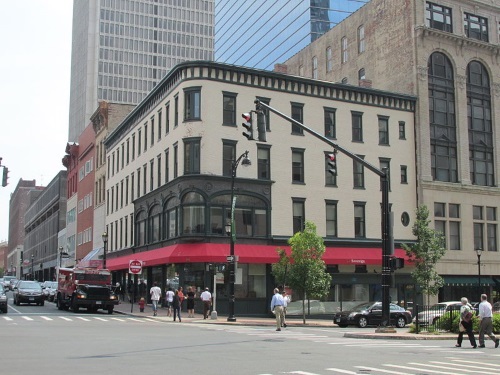 The Connecticut Department of Transportation’s Office of Highway Safety has launched a new campaign to raise awareness about a new statewide pedestrian safety law that goes into effect on October 1.

[Above photo of Asylum Street in Hartford, CT, via Wikimedia Commons]

Dubbed the Pedestrian Rules campaign, it seeks to educate residents about how that new pedestrian safety law expands the circumstances under which motorists must yield the right-of-way to pedestrians at marked and unmarked crosswalks not controlled by traffic signals or police officers.

As under existing law, motorists who fail to yield at a crosswalk when required are subject to a $500 fine, the Connecticut DOT said.

Meanwhile, the act of “dooring” will also become illegal in Connecticut on October 1. That new law prohibits a person from causing physical contact between a vehicle door and moving traffic by (1) opening the door, if the moving traffic is traveling at a reasonable speed with due regard for the safety of people and property, or (2) leaving it open longer than needed to load or unload passengers.

“Across the country, we are seeing increased pedestrian fatalities and injuries,” said Joseph Giulietti, commissioner of the Connecticut DOT, in a statement.

“Nationally, we saw an unprecedented 55 percent increase in pedestrian deaths between 2009 and 2018,” he added. “And although we are seeing a small recent decrease, pedestrian fatalities recorded in 2018 and 2019 have not been this high since 1990.”

According to preliminary estimates released in June by the National Highway Traffic Safety Administration, pedestrian fatalities in 2020 totaled 6,205 – the same as 2019, the agency noted. Yet agency data indicates that 2019 number that is 44 percent higher compared to pedestrian fatalities recorded in 2010.

“This new pedestrian safety law is an important step to keep everyone safe, and ultimately save lives,” added Giulietti.

Concurrently, various states across the country are achieving significant reductions in pedestrian fatalities.

For example, while a report issued by the Governors Highway Safety Association in March showed pedestrian fatalities trended up in the first half of 2020, the report also noted how several state-directed efforts are successfully improving pedestrian safety.

That report found that pedestrian fatalities during the first half of 2020 declined in 20 states and Washington D.C. compared with the same period in 2019. Meanwhile, nine states – Alabama, Florida, Hawaii, Kentucky, Massachusetts, New York, Oklahoma, Pennsylvania and South Carolina – witnessed double-digit percentage and numeric declines in pedestrian fatalities in the first six months of 2020 compared to the same six-month period in 2019.

GHSA’s report noted that most pedestrian fatalities occur on local roads, in the dark, and away from intersections – suggesting the need for safer road crossings and increased efforts to make pedestrians more visible through improved lighting and other countermeasures.