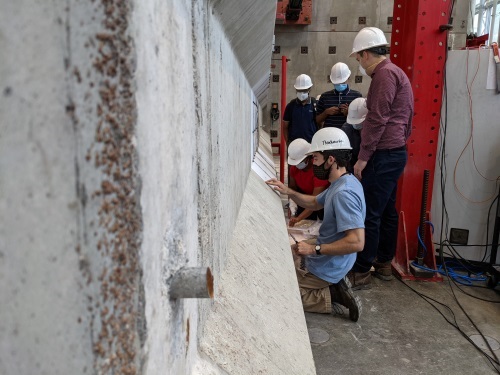 The North Carolina Department of Transportation is funding a research project undertaken by North Carolina State University to study steel girders from the now-demolished Herbert C. Bonner Bridge to help improve designs for such structures in the future.

Those girders are undergoing stress tests at the university’s Constructed Facilities Lab in Raleigh to see how an aged bridge exposed to a half-century of extreme weather conditions can provide design improvement insights.

“This is a very unique opportunity,” said Neil Mastin, who manages NCDOT’s Research and Development unit, in a statement. “It’s not often you get a bridge in that extreme environment for nearly 60 years that was intact enough that we can actually use it for testing.”

The test consists of two parts. First, low-level cyclic loading applies, removes, and then re-applies forces to the girders repeatedly in a manner similar to the kinds of stresses caused by vehicles continually crossing a bridge span. Then, the girders are subjected to “monotonic loading” until reaching peak load levels – essentially pressing on it continuously until it breaks.

How much force did it take to break the old Bonner Bridge girders? More than 200,000 pounds, noted Giorgio Proestos, an assistant professor at N.C. State who is leading this project.

He added that sensors with cameras observe how the beam responds to loads, how it moves, and where cracks form at specific girder pressure points.

“What we’re trying to really investigate is the amount of pre-stressing in this structure,” Proestos explained. “Is it enough? Should there be more? Should there be less? And how does that pre-stressing change in 60 years? Based on the results of the experiment, there might be changes in the way things are done moving forward.”

NCDOT said it would publish the results after the project concludes and expects those results should provide insights for bridge design and building decisions on a national basis, not just for North Carolina.