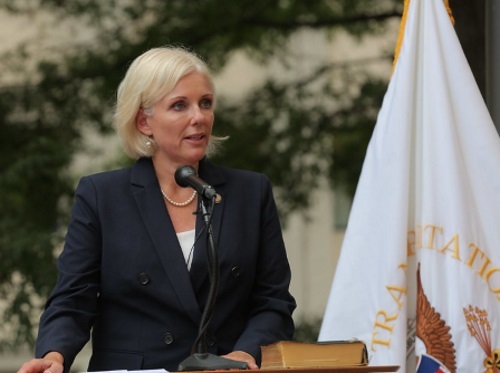 Jennifer Homendy, the new chair of the National Transportation Safety Board, recently called upon the industry to “embrace a new way, a new approach, a new vision” to eliminate roadway fatalities and injuries; an approached focused on safety rather than the most efficient way to move people and goods.

[Above photo by the NTSB]

Delivering the keynote speech delivered September 13 at the Governors Highway Safety Association annual meeting in Colorado, Homendy touted the adoption of what she called the “Safe System Approach” with the goal of achieving zero roadway fatalities.

“On my first day as NTSB chair [August 13] I again reviewed the number,” she explained. “Last year [2020], there were 756 fatalities on our nation’s railroads, including 198 at grade crossings, which represents a 33 percent decrease from 2019 levels. Zero crashes and zero deaths on major airlines, nearly 700 in marine, 15 in pipelines, and 38,680 lives lost on our nation’s roads.”

She stressed that 38,680 figure is the highest number of roadway fatalities since 2007.

Homendy emphasized that the “current approach” favoring automobiles and punishing only drivers for crashes “is clearly not working. If we are going to get to zero, we will have to do something different.”

That is why she is “calling on all transportation leaders, from roadway designers and public health officials up to the governor, from vehicle manufacturers to transportation providers, from entire communities to safety advocates to embrace a new way, a new approach, a new vision.”

Homendy said the “Safe System Approach” demands the strengthening of all parts of the nation’s roadway system so that if one part fails, road users remain protected.

“With more than 200 million drivers on the road, somebody will make a mistake. That is guaranteed,” she noted. “But that mistake does not need to end in tragedy. Other parts of the system – safe vehicles, safe roads, safe speeds, and post-crash care – can still prevent the worst outcomes.”

Homendy emphasized that the United States has “spent decades” developing countermeasures and behavioral interventions targeted at individuals, rather than the entire system.

“Let’s take speeding,” she said. “Does the responsibility for speeding just fall on the driver or did the system, as a whole, fail that driver? Did the road design encourage high speeds? How about ill-conceived federal guidance that leads to ever-increasing speed limits in States? How about states which fail to give local authorities the ability to set lower speed limits? Vehicle manufacturers who design vehicles that can exceed 100 miles per hour or that have no speed limiters. The Safe System approach considers all this and more.”

She added that only through an “all-inclusive effort” can roadway fatalities fall to zero. “In short, we need to break down the silos and make sure everyone is at the table and working together to identify the best solutions,” she explained in her remarks,” Homendy said.

“It will take bringing everybody to the table to identify the best solutions: planners, designers, and engineers, law enforcement, policymakers, public health professionals, educators, vehicle manufacturers, insurers, rail and transit providers, car seat manufacturers, fleet managers, road users, the media, entire communities that normally don’t have a seat at the table, and many more. And that has to include our biggest critics,” she stressed.