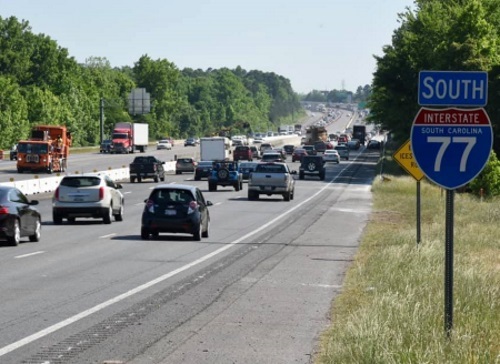 A new report published by national transportation research firm TRIP said that increased transportation funding provided by the South Carolina legislature’s passage of the 2017 Roads Bill has allowed the state to move forward with “numerous projects to improve road and bridge safety while speeding up repairs.”

[Above photo by the SCDOT]

For example, projections indicate South Carolina’s population should increase to approximately 6.4 million people by 2040 while vehicle travel expanded at the fifth highest rate in the nation between 2014 and 2019. TRIP’s report added that traffic congestion is worsening statewide, costing South Carolina drivers a total of $2.1 billion each year in the form of lost time and wasted fuel.

Meanwhile, the amount of annual freight tonnage moving by South Carolina’s roads – overall some 465 million tons of freight transit South Carolina yearly – should grow by 65 percent by 2040. Accommodating the significant increase expected in the movement of truck freight in South Carolina could be further challenged by the significant number of freight routes in the state that are constrained because they have inadequate load carrying capacity to accommodate large trucks, TRIP’s report noted.

“While the 2017 investment has provided a significant boost to the state’s ability to address repairs and improvements, South Carolina will need to look for opportunities to increase transportation investment from all levels of government – federal, state, and local,” said Dave Kearby, TRIP’s executive director, in a statement.

“A safe, reliable and well-maintained transportation system that offers improved mobility and accessibility to meet the needs of South Carolina residents, businesses, and tourists alike, is critical to moving South Carolina forward,” he added.

“South Carolina is the tenth fastest growing state in the nation and our transportation network must keep pace,” noted Christy Hall, secretary of the South Carolina Department of Transportation, in a separate statement.

“While the 2017 Roads Bill provided a significant funding boost, it still fell just short of providing sufficient funding to deal with the explosive growth in our state,” she explained.

“Congestion needs to be addressed on our urban and rural interstates, such accelerating the widening of I-26 between Charleston and Columbia. The issue of congestion, delay and unreliability of the transportation network impacts every South Carolinian on a daily basis,” Hall added. “Whether it is getting to work or school on time or the delivery of packages and freight all across the state, it matters if the network is operating smoothly.”