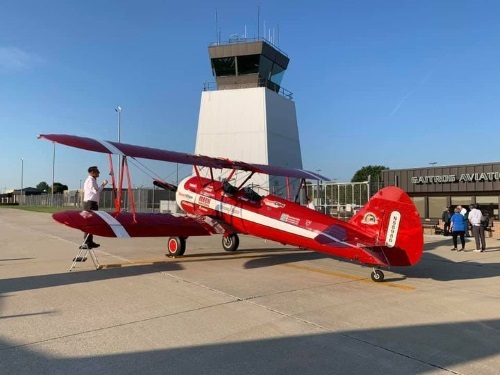 Reflecting the importance and vitality of the state’s aviation system, the Illinois Department of Transportation recently named 12 “Airport of the Year” award recipients during the recent Illinois Public Airports Association Fall Conference.

[Above photo by the Decatur Airport]

As the COVID-19 pandemic cancelled the 2020 Illinois Public Airports Association, the agency said it made its annual “Airport of the Year” awards based on achievements over the last two years, with six state airports winning awards for 2020 and six for 2021.

“Aviation is one of the key components that goes into making Illinois the transportation hub of North America,” explained Omer Osman, Illinois DOT secretary, in a statement.

“Our aviation partners take great pride in the work they do supporting transportation, jobs and quality of life in their communities,” he added. “These awards highlight their efforts as well as those of the entire Illinois aviation community.”

The Illinois DOT said it gives these awards to airports based on cooperation and coordination with the state, safety record, facility maintenance, customer safety and satisfaction, plus promotion of aviation and educational events.

The agency added that Illinois is home to almost 100 public-use airports and heliports, with nearly 3,000 aircraft registered with the Federal Aviation Administration. The state’s system of airports support more than 492,000 jobs, with a combined payroll of $21.9 billion and a total economic impact of $95.4 billion, the Illinois DOT noted.

Altogether, Illinois is home to more than 700 aviation facilities, including heliport and grass landing strips as well as balloon, glider, and ultra-light landing facilities.

As part of Rebuild Illinois – the multimodal capital program signed into law by Governor J.B. Pritzker in 2019 – Illinois is making critical investments in aviation infrastructure, with $150 million identified for the state’s airports. The agency added it would distribute $94 million in grant funds via the Rebuild Illinois program late this fall to support a variety of state airport projects.