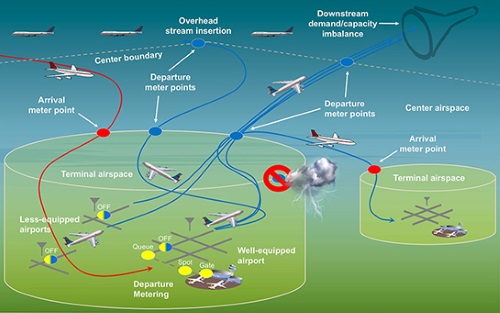 As part of an effort aimed at making aviation more sustainable, NASA transferred findings from an aviation management project to the Federal Aviation Administration for nationwide implementation, the two agencies announced at a media briefing Tuesday.

[Above graphic by NASA]

Over the past six years, NASA’s Airspace Technology Demonstration 2 or ATD-2 project demonstrated the benefits of a suite of airport operations tools known as Integrated Arrival, Departure, and Surface or IADS technology.

The FAA plans to implement IADS capabilities via a new program called Terminal Flight Data Manager or TFDM, which it will deploy to 89 airports, beginning in 2022 with deployment at Phoenix Sky Harbor International Airport.

More advanced IADS capabilities demonstrated under ATD-2 will go to 27 of the nation’s busiest airports under TFDM, the agency said.

“NASA is developing transformative technologies that will revolutionize the aviation sector as we know it. This air traffic scheduling technology enhances aircraft efficiency and improves dependability for passengers every day,” Bill Nelson, NASA’s administrator, explained in a statement.

“I’m excited the software NASA developed for air traffic controllers and airlines will be soon rolled out at airports across the country and know the results will continue to be extraordinary,” he added.

ATD-2 set out to improve the predictability and operational efficiency of the air traffic systems in areas with multiple airports.

The IADS capabilities developed and demonstrated under ATD-2 achieved this goal, NASA said – demonstrating benefits that include fuel savings, emission reductions, and time savings for airlines and the flying public alike.

The program also reduced greenhouse gas emissions by eight tons of carbon dioxide daily and reduced delays by 916 hours over four years, equivalent to an average of 15 minutes of wait time on a taxiway for more than 3,600 departing flights.

“The future of flight must be more sustainable and environmentally friendly,” said FAA Administrator Stephen Dickson. “This new capability as part of a flight merging system has a double benefit: It reduces aircraft emissions while, at the same time, air travelers experience more on-time departures.”