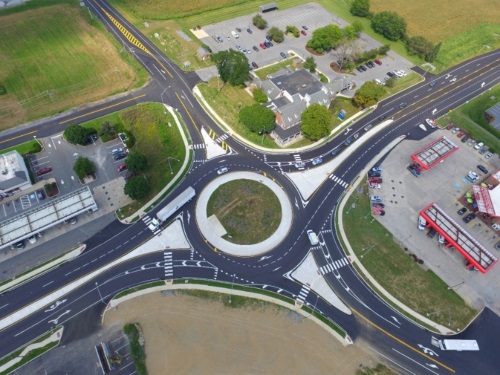 The Pennsylvania Department of Transportation recently noted that overall fatalities, injuries, and crashes decreased at 26 roundabouts at 23 locations statewide over the last 20 years.

PennDOT recently reviewed data for 26 roundabouts located at intersections on state routes on state routes that were previously controlled by stop signs or traffic signals. Department data based on police-submitted crash reports from 2000 through 2020 indicates fatalities at those locations dropped by 100 percent, with the total number of crashes falling by 22 percent.

“The modern roundabout is simply safer than the traditional intersection,” PennDOT Secretary Yassmin Gramian explained in a statement. “Though not the right option for every intersection, data shows that when installed, roundabouts save lives and reduce crash severity.”

PennDOT noted that it usually builds roundabouts to address intersections with safety issues, but also constructs them to improve traffic flow as well as other reasons, such as traffic calming and to facilitate pedestrian mobility.

Although roundabouts are safer and typically more efficient than traditional signalized intersections, the agency stressed that they may not always be the best option due to topography or other reasons, such as property impacts, capacity issues, and proximity to other intersections.

[Editor’s note: The Arizona Department of Transportation recently put together a blog post and video highlighting some of the safety and traffic management benefits of roundabouts.]

“Simply put, roundabouts are a win-win for everyone on the road,” explained Joseph Giulietti, commissioner of the Connecticut Department of Transportation, during a “national roundabout week” press event.

“By both reducing speeds and reducing wait times at intersections, roundabouts are helping us build better, more efficient and safer roads for drivers, bicyclists, and pedestrians across Connecticut,” he said.

Currently, the agency said there are 14 roundabouts on Connecticut roadways and 11 additional projects are in the planning phase. Additionally, the department has established a “Roundabout Committee” of experienced engineers to assist with the planning, design, and construction of roundabouts around the state to help communities review roundabout concepts and provide advice on good design practices and consistency.