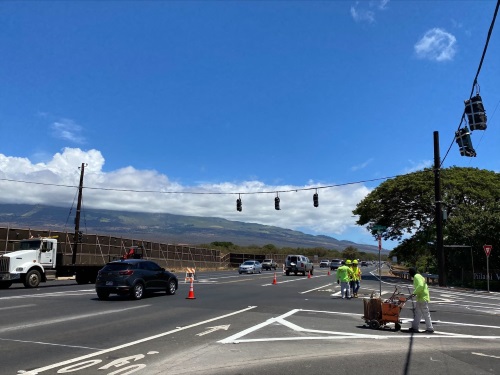 The Hawaii Department of Transportation is making resiliency a key factor within its proposed realignment of the West Maui highway system.

In July, HDOT submitted a grant proposal for Rebuilding American Infrastructure with Sustainability and Equity or RAISE funds to help supplement the $90 million cost of realigning 4.5 miles of Honoapiilani Highway from Ukumehame to Laniupoko. The agency said it expects to learn by late 2021 if its proposal is successful and, if so, construction would begin in 2024.

“Honoapiilani Highway is a critical route and we are taking the steps necessary to ensure it is protected from sea level rise and coastal erosion,” said Ed Sniffen, Hawaii DOT’s deputy director for highways, in a statement. “As the planning, environment, and design process continues we’ll be asking for public input and support for the realignment.”

He added that “temporary mitigation action” to keep Honoapiilani Highway protected while the realignment project is underway includes shifting the existing alignment approximately 12 feet away from the ocean; an effort that will cost an estimated $4 million.

Sniffen noted in testimony during a Senate hearing in May that formula funding mechanisms are critical to building resilience into the nation’s transportation system.

“The 2017 ‘Hawaii Sea Level Rise Vulnerability and Adaptation Report’ forecasts one meter of sea level rise affecting the Hawaiian Islands by 2100,” he said. “If we took a traditional approach of relocating transportation facilities, we would be looking at an estimated $30 billion to relocate or elevate state roads and bridges, address impacts to airports, and protect the state’s commercial harbor facilities.”

That is where resiliency comes into play, Sniffen stressed.

“I believe that the definition of resilience is critical and should not be related simply to the ability of an asset to not fail during certain events such as a bridge strike or a category-five hurricane,” he emphasized.

“Rather, it needs to involve the ability of a state department of transportation to anticipate, plan, and adapt to potential risks; withstand, respond to, or recover when an event occurs; and construct and maintain assets that decrease project vulnerability risks,” Sniffen said.