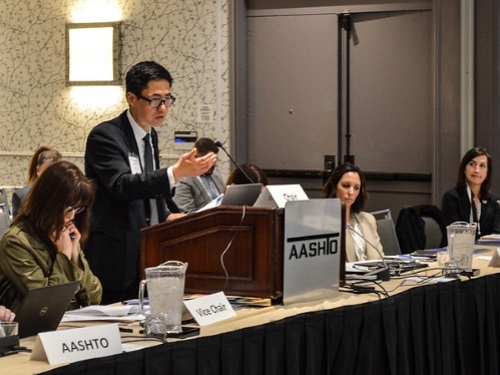 In this episode of the Environmental Technical Assistance Program or ETAP Podcast, Joung Lee (seen above at podium) – director of policy and government relations for the American Association of State Highway and Transportation Officials – discusses the potential benefits of the $1.2 trillion infrastructure bill being debated in Congress.

The House of Representatives currently plans to vote on the infrastructure bill – formally known as the Infrastructure Investment and Jobs Act or IIJA and passed with bipartisan support by the Senate in mid-August – at the end of October.

The House delayed votes on the measure originally scheduled on September 27 and then September 30 as factions of the Democratic Party fought over legislative and funding priorities involving the much larger $3.5 trillion reconciliation bill covering social programs.

Late on October 1, the House passed a 30-day surface transportation funding extension measure, which expires October 31, to provide more time for legislators to find a way around the infrastructure bill impasse. The Senate subsequently passed that extension on October 2, with President Biden signing it into law that same day.

Lee – who also serves as the staff liaison to AASHTO’s Transportation Policy Forum – noted in the podcast that AASHTO has successfully represented the interests of state departments of transportation within the infrastructure bill. He noted, for example, that the most recent version of the bill incorporates four out of five of AASHTO’s core priorities.