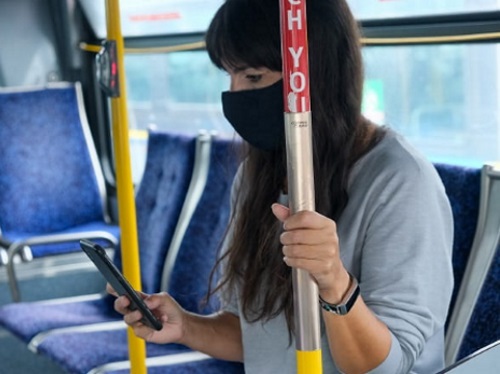 Antimicrobial copper coatings are being installed on high-touch transit surfaces on Ontario-based Toronto Transit Commission (TTC) and British Columbia-based TransLink vehicles following a successful pilot phase that supports copper’s ability to kill up to 99.9 percent of bacteria on equipment surfaces.

[Above photo by Translink]

This new round of testing seeks to confirm those results from the first phase of the study, conducted in Vancouver, British Columbia, by evaluating copper surfaces on more transit vehicles over a longer duration of time across two different regions.

In this second phase of testing, medical microbiology teams at Vancouver Coastal Health (VCH) and Mount Sinai Hospital/University Health Network will be undertaking regular bacteria testing, and VCH will be conducting laboratory testing on copper’s ability to kill viruses in addition to bacteria.

This trial – fully funded by Teck Resources Limited as part of its Copper & Health program – will install three types of copper coatings on high-touch surfaces on several TTC buses, subway cars, and streetcars, as well as several TransLink buses and SkyTrain cars.

Testing of those coatings – functional copper surface layers, copper alloys, and copper decals – will occur every two months over a one-year period to confirm their bacterial-killing propensity as well as their long-term durability in transit environments.

The results of this trial could improve understanding of options for infection prevention for the transit industry and other industries that rely on shared public spaces, noted Kevin Quinn, TransLink’s CEO, in a statement.

“The [COVID-19] pandemic has taught us to be bold and innovative to continue meeting the needs of our customers,” he said.

“Through this copper pilot, we have partnered with healthcare professionals to find creative ways to make transit cleaner and safer for our customers,” Quinn added. “We’ve found that copper can kill up to 99.9 percent of bacteria on transit surfaces so far. We’re so excited to have our industry-leading pilot expand nationally to learn more about copper’s potential health benefits on transit.”

“If this study confirms the results of the initial first phase study conducted in Vancouver showing the effectiveness of copper to kill 99.9 percent of bacteria, which I believe it will, it will open up the potential for its use in a broad range of settings,” added Dr. Tony Mazzulli, microbiologist-in-chief for the Sinai Health/University Health Network.

“The potential impact of this at reducing the spread of infections from surfaces will be tremendous,” he said.