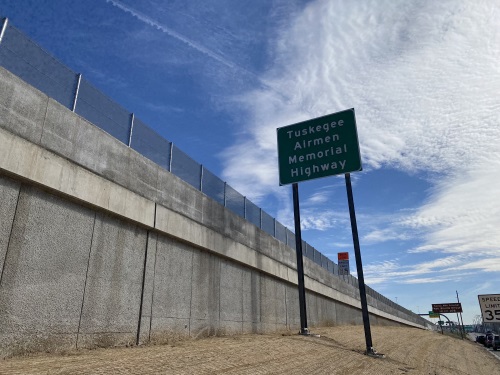 The Colorado Department of Transportation recently reinstalled interstate signs commemorating the Tuskegee Airmen along Interstate 70 at Dahlia Street and I-270.

The agency temporarily removed those signs due to construction related to the $1.2 billion Central 70 Project. That project is reconstructing a 10-mile stretch of I-70, adding one new Express Lane in each direction, while removing an aging 57-year-old viaduct, and lowering the interstate between Brighton and Colorado boulevards.

In 2006, Colorado renamed the stretch of I-70 between York and Peoria streets the Tuskegee Airmen Memorial Highway in honor of the first Black aviators in the U.S. Army Air Corps, a precursor of the U.S. Air Force.

Founded in 1941, the group ceased operation in 1946 after flying more than 15,000 missions during World War II and many of the Tuskegee Airmen eventually made their homes in Colorado.

“The Airmen’s incredible demonstration of perseverance, strength and selflessness during hardship are lessons we can still learn from today,” he added. “We hope that those who travel on I-70 and see this sign are reminded of the sacrifices the Airmen made and the path they paved for a more equitable future.”