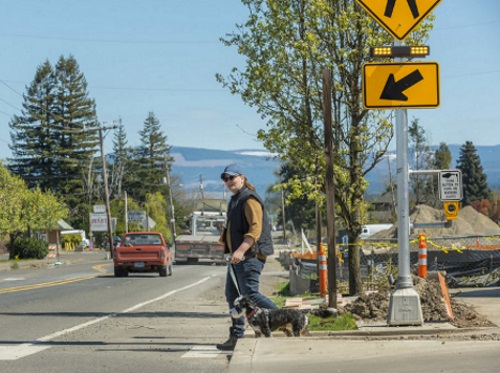 The National Highway Traffic Safety Administration, the Federal Highway Administration, and state departments of transportation across the country are celebrating October as National Pedestrian Safety Month by strengthening their efforts to improve safety for vulnerable road users.

“On average, a pedestrian was killed every 85 minutes in a traffic crash in 2019 — a haunting fact,” said Steve Cliff, NHTSA’s acting administrator, in a statement. “We must all work together to prevent and eliminate crashes leading to serious injuries and deaths of our nation’s pedestrians.”

“Our roads and streets must be safe and feel safe for pedestrians so that they can get to their destinations safely and seamlessly,” added Stephanie Pollack, FHWA’s deputy administrator. “All of us – state and local transportation agencies, planners and road designers, drivers and safety advocates – can contribute to improving safety for people who walk and roll.”

The Governors Highway Safety Association is projecting that 6,721 pedestrians died on U.S. roads in 2020 – a 4.8 percent increase from 2019 despite a drastic drop in vehicle miles traveled. That trend continued into 2021 as NHTSA recently reported that 8,730 people died on U.S. roadways in the first quarter of 2021, a 10.5 percent increase compared to the same period in 2020.

GHSA’s report noted that most of those pedestrian fatalities occur on local roads, in the dark, and away from intersections – suggesting the need for safer road crossings and increased efforts to make pedestrians more visible through improved lighting and other countermeasures.

GHSA also highlighted several successful pedestrian safety campaigns launched by state DOTs as well. For example, Watch for Me NC – directed by the North Carolina Department of Transportation – is a comprehensive program that uses public education, community engagement and high visibility enforcement to reduce pedestrian and bicyclist injuries and deaths.

A 2020 survey of state residents found the program resulted in increased awareness of the state law requiring drivers to stop for a pedestrian in a crosswalk, which is helping to protect people on foot, NCDOT said.

The New Mexico Department of Transportation recently adopted its first Pedestrian Safety Action Plan, which details what the department and its partners will do over the next five years to reduce the number of pedestrian-involved serious injuries and fatalities.

The Minnesota Department of Transportation also launched its first Statewide Pedestrian System Plan in May 2021 – a plan that provides “policy and investment guidance” to improve places where people walk across and along Minnesota highways.

That plan also served as the foundation for a new Minnesota DOT safety campaign – “Let’s Move Safely Together” – launched in July that reminds people to use extra caution when driving and walking.

“One life lost on our roadways is too many. When we work as a team and watch out for each other, we can save lives and make progress Toward Zero Deaths,” said Margaret Anderson Kelliher, Minnesota DOT’s commissioner, in a statement earlier this year.

Meanwhile, the Connecticut Department of Transportation’s Office of Highway Safety launched a campaign to raise awareness about a new statewide pedestrian safety law that went into effect on October 1.

Dubbed the Pedestrian Rules campaign, it seeks to educate residents about how that new pedestrian safety law expands the circumstances under which motorists must yield the right-of-way to pedestrians at marked and unmarked crosswalks not controlled by traffic signals or police officers.

“Across the country, we are seeing increased pedestrian fatalities and injuries,” said Joseph Giulietti, commissioner of the Connecticut DOT, in a recent statement.

“Nationally, we saw an unprecedented 55 percent increase in pedestrian deaths between 2009 and 2018,” he added. “And although we are seeing a small recent decrease, pedestrian fatalities recorded in 2018 and 2019 have not been this high since 1990. [That’s why] this new pedestrian safety law is an important step to keep everyone safe, and ultimately save lives.”