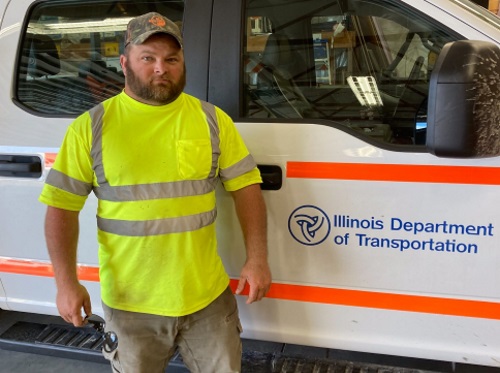 Alan Ingle (seen above), who works for the Illinois Department of Transportation as a highway maintainer, recently saved the life of a truck driver trapped following a crash on I-70.

[Above photo via the Illinois DOT]

While hauling rock from a local gravel pit, Ingle witnessed the crash occur just ahead of him: A tractor-trailer traveling southwest on Interstate 70 flipped and landed in a ditch.

First, he stopped his vehicle – straddling the traffic lanes with his vehicle’s hazard lights on – to warn oncoming traffic of the crash. Then Ingle noticed fuel leaking from the overturn rig and realized he needed to rescue the tractor-trailer’s driver – fast.

He quickly hopped on the cab and determined that the driver was conscious but confused. Ingle was able to reassure her that everything would be okay and helped her and her dogs get out of the cab. The driver walked away with minor scrapes and bruises.

“It was very apparent that the truck tractor was leaking diesel fuel from the tanks all over the underside of parts of the engine. The truck tractor could have easily caught fire with the driver still inside,” said Illinois State Trooper Ryan Mayhaus in a blog post. “Mr. Ingle was able to help the driver before fire, EMS [emergency medical service], or any troopers could get to the scene. It is my opinion that Mr. Ingle helped save a life.”

Ingle isn’t a stranger to being in the right place at the right time. Earlier in 2021, he and a coworker came upon an overturned camper that was on fire. Equipped with military experience and training as a volunteer with the Toledo Fire Department, he quickly extinguished that fire.

However, Ingle stressed that he does not view the rescue of the truck driver and her dogs as heroic. “It’s part of our job to ensure the safety of the traveling public,” he said.