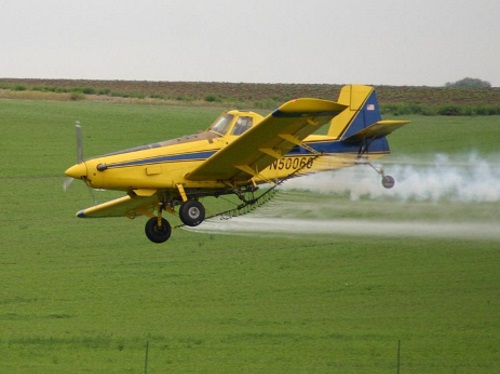 [Above photo by Jenny Jones via Wikimedia Commons]

Meanwhile, a North Dakota-based effort is gearing up to test new technology that improves the beyond-visual-line-of-sight or BVLOS of drones in search and rescue efforts plus package delivery and infrastructure inspection operations.

In MSU’s case, the concern is that agricultural aviators – such as “crop dusters,” which spray pesticides from the air – fly as low as 10 feet off the ground and at speeds up to 140 miles per hour. That makes them the most frequent type of aircraft sharing low altitude space with unmanned aircraft systems – often referred to as UAS or drones – with greater frequency than other airplanes, MSU noted.

In addition, by law, UAS must give the right-of-way to manned aircraft, noted Tom Brooks, director of MSU’s Raspet Flight Research Laboratory, in a blog post.

“With UAS increasingly populating the skies, it’s in everyone’s interest to better understand how these two types of aircraft can safely share airspace,” he explained.

“We’re synthesizing available agricultural aviation data to better understand typical flight patterns and tendencies of our [agricultural] fliers,” Brooks added. “We’re identifying trends and plan to later integrate this data with existing predictive models that will account for this vital aspect of aviation in developing safe integration of UAS into the national airspace system.”

Agricultural aviation appears, in some ways, to be an understudied aspect of aviation, according to Raspet researchers. Topographical obstacles, the curvature of the earth and the positioning of radars at airport terminals, for example, limit radar-provided information on low-flying agricultural aircraft, the lab said.

One of the major barriers to commercial drone flights – including package deliveries, infrastructure inspections, plus search and rescue efforts – is that they currently must remain within visual line of sight of the pilot.

Thales’ technology will enable Vantis – a North Dakota-funded network of radar, radios, and other communications equipment on towers distributed statewide – to provide BVLOS capability across its system to drone pilots.

“BVLOS operations are the greatest economic driver for sustained commercial UAS use-cases and, until now, there hasn’t been any common, or shared-use, infrastructure to support routine BVLOS operations,” said Todd Donovan, vice-president of airspace mobility solutions for Thales, in a statement.

“Ultimately, the approach for unmanned systems with Vantis in North Dakota will likely shape how we approach UAS integration more broadly,” he noted.