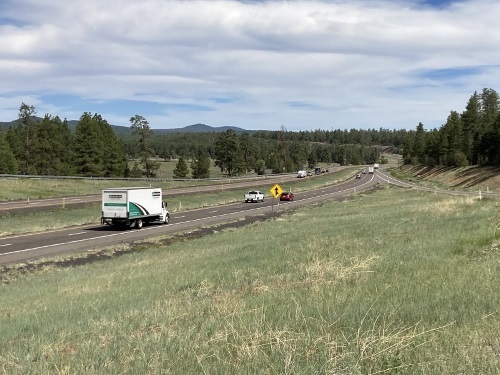 The Arizona Department of Transportation recently began work on a project to bring broadband internet access to more Arizonans by laying fiber-optic conduit along a 46-mile stretch of I-17 from Flagstaff to Sedona.

The agency noted that its work crews plan to install the fiber-optic conduit in three-mile stretches at a time and expects to finish the project by the summer of 2022.

As part of the state’s broadband initiative launched in January, the Arizona DOT is collaborating with the Arizona Commerce Authority to create more affordable opportunities to expand high-speed internet service to rural communities statewide.

The agency said in a statement that its role is to provide access to its right-of-way along the four main interstates in Arizona to place fiber-optic conduit for rural internet providers.

In addition to the benefits to rural broadband connectivity, the Arizona DOT said it plans to use the fiber optic cable laid by its crews to power more “smart highway” technology, such as overhead message boards, traffic cameras, weather stations, and wrong-way driving detection technology. The infrastructure also will help lay the groundwork for emerging technology like connected and automated vehicles, the agency said.

The Arizona DOT added that it already has installed fiber-optic conduit along freeways in the Phoenix and Tucson areas, as well as a stretch of Interstate 10 near Eloy for the dust detection and warning system.

Arizona DOT’s work on installing fiber-optic cable is part of a growing national trend that links the ability to expand broadband access to leveraging assets such as highway rights-of-way – especially for rural residents.

For example, in 2019, InnovateOhio and the Ohio Department of Transportation issued a 16-page broadband access report – a report commissioned at the behest of Ohio Governor Mike DeWine (R) – to provide a strategic plan for “improving and expanding broadband” across the state.

The key finding of that report is that the rights-of-way along state-owned interstate highways “hold considerable value” that can be “leveraged in order to expand broadband.”

However, the report cautioned that there is no “silver bullet” and a variety of strategies should be employed to make sure every Ohioan has access to high-speed internet.

While states do not support a strict federal preemption on how they manage broadband deployment on their own properties, Carlos Braceras – executive director of the Utah Department of Transportation and 2018-2019 president of the American Association of State Highway and Transportation Officials – has noted in Congressional testimony that speeding up the federal permitting process is key.

Especially for rural areas, speeding up the permitting process would in turn facilitate “the merger of technology between motor vehicles and infrastructure,” leading to greater mobility and increased safety on the nation’s roads.

“An important component to advance roadway technology is the ability to create a digital highway with fiber optics to make our roads smarter and safer, benefiting surrounding communities, including underserved rural areas,” he stressed.