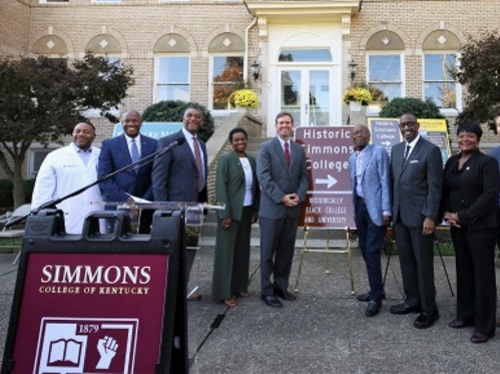 [Above photo via the Kentucky Governor’s Office]

He noted that contractors hired by the Kentucky Transportation Cabinet are installing five signs on two Kentucky interstates and a local Jefferson County roadway.

“Louisville and Frankfort are home to the state’s only HBCUs, and these signs will elevate awareness to Kentuckians and travelers alike of the historic significance these higher learning institutions have played in Kentucky’s history,” Gov. Beshear said in a statement. “These institutions, their missions and the people they serve are vital parts of Team Kentucky and crucially important as we build a better Kentucky for every family.”

“We’re proud to display the names of these long-standing institutions on state signs to help visitors easily locate these campuses while giving a nod to one of the many reasons they are notable in Kentucky,” added Jim Gray, KYTC secretary.

Three “Historic Simmons College” signs honoring Simmons College of Kentucky will be installed facing both directions of Interstate Highway 65 near Exit 135 in Jefferson County, followed by a third sign on St. Catherine Street before Seventh Street – also known as Kentucky Highway 1931. This is the first appearance of interstate signage recognizing the college, the KYTC noted.

Meanwhile, the agency is installing two “Kentucky State University” signs facing both directions of I-64 near Exits 53B and Exit 58, respectively. While KSU directional signage has been present on I-64, the new signage will identify the institution as a HBCU. Each sign is 19-feet tall and weighs 907 pounds, KYTC noted.