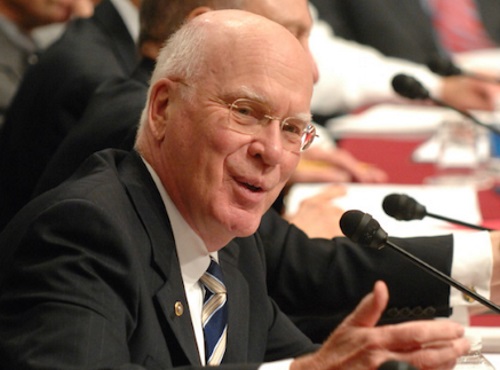 The U.S. Department of Transportation would receive $90.5 billion in total budgetary resources for fiscal year 2022 – some $3.8 billion more than the FY 2021 enacted level – via one of the nine funding bills issued by the Senate Appropriations Committee on October 18.

[Above photo of Sen. Patrick Leahy, D-Vt., chairman of the Senate Appropriations Committee]

The FY 2022 Transportation, Housing and Urban Development, and Related Agencies or THUD bill also provides over $66 billion for transportation infrastructure investments across all modes of transportation.

Like the House Appropriations package for FY 2022 from earlier this year, the Senate panel’s funding is subject to transportation dollars that would be authorized by the $1.2 trillion five-year bipartisan infrastructure bill – known as the Infrastructure Investment and Jobs Act or IIJA – passed by the Senate in August and currently pending in the House of Representatives. If enacted, the IIJA would provide more funding than what is contained in the Senate Appropriations Committee’s proposal.

In terms of modal agency funding, the Federal Highway Administration receives $49.9 billion, including $47.1 billion from the highway trust fund and $2.8 billion from the general fund. The Federal Railroad Administration receives $220 million for its State-of-Good-Repair program to fund the replacement, rehabilitation, or repair of major infrastructure assets providing intercity passenger rail service, along with $552 million for its Consolidated Rail Infrastructure and Safety Improvement or CRISI program.

The bill provides the Maritime Administration with $240 million for its Port Infrastructure Development program, to provide planning and capital assistance to improve the efficient movement of commerce. The Federal Aviation Administration gets $3.2 billion to address the agency’s backlog of facilities and tower repairs, as well as to invest in critical NextGen programs. It also includes $603 million for the FAA’s Airport Improvement Program.

The bill also includes $1.09 billion for the multi-modal Rebuilding American Infrastructure with Sustainability and Equity or RAISE grant program plus a new $50 million program for local safety planning and improvements, such as “Vision Zero” plans.

That also includes a $50 million increase for FAA research to advance Sustainable Aviation Fuels, $11 million to provide for a Zero Emission Vehicle or ZEV fleet for the USDOT, $132 million for the Federal Transit Administration’s Low and No Emission Vehicle program, and $18 million for ZEV research for transit systems.