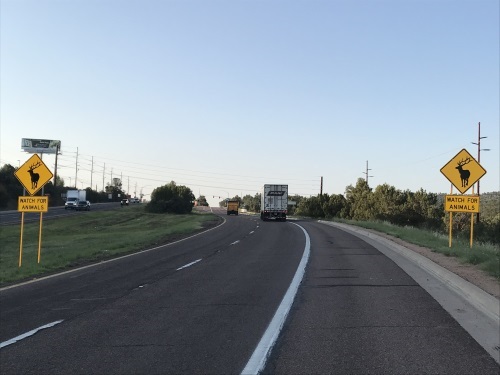 The agency said those new placards are being pilot tested on State Route 87 south of the town of Payson in both directions.

“We needed to come up with a new sign design that would display the wording, ‘Watch for Animals’ as well as the animal symbol to let all drivers be aware of the potential hazards,” explained Josh Hale, an engineering specialist with Prescott Valley Transportation, who helped design the new placards.

“Some drivers react to visual symbols and some respond to wording better,” he said in a statement. “The new signs give the driver a better visual picture, with the symbol and the wording all in one sign.”

The design of the new placards result from extensive research along that section of S.R. 87 as well as a review of wildlife maps and crossings as well as crash data maps.

“The placement of our new signs was crucial in our decision-making. We need an area where they would be seen and get the most attention from the public,” said Hale.

Several state departments of transportation are reporting a falloff in collisions between motor vehicles and wildlife over the past year – in part due to the reduction of vehicle miles traveled due to the COVID-19 pandemic.

The North Carolina Department of Transportation, for example, said in a statement that the number of such crashes – usually involving deer and often occurring in the twilight hours during the fall – totaled 18,607 in 2020, which is 8.5 percent lower than 2019.

Officials with NCDOT’s Traffic Safety Unit – which compiles an Animal Related Crashes​​ report each year – attributed the decline partially to an overall drop in highway travel last year during the height of the COVID-19 pandemic.