FHWA: Highway Trust Fund Should be Solvent into 2022 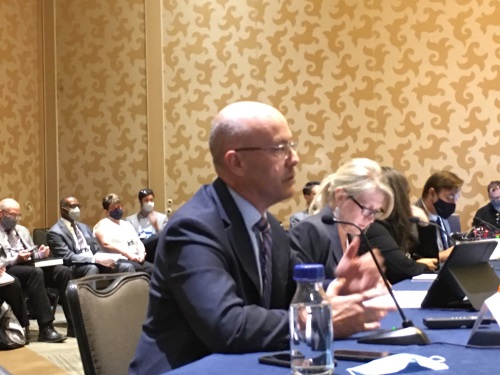 Due to several “true-ups” – the reconciling or matching two and more than two accounts’ balances – paid into the Highway Trust Fund by the U.S. Department of the Treasury, the HTF should be solvent well into 2022, according to a Federal Highway Administration presentation at the American Association of State Highway and Transportation Officials annual meeting in San Diego.

“We now have enough balance [in the HTF] to go into late spring or early summer because we received a number of ‘true-ups’ from Treasury over the last several months,” explained Brian Bezio (seen above), FHWA’s chief financial officer, during a Committee on Funding and Finance discussion at AASHTO’s annual meeting.

“Historically, such ‘true-ups’ are in the hundreds of millions range – but the last four were in the billions,” he said. “That has placed us in a much better spot, especially as outlays are slowing down now as we get out of construction season.”

Bezio reminded those attending the meeting that FHWA “will never let HTF go bankrupt” – however, he said the agency “would slow down obligations via cash management decisions” in order to keep it solvent.

In August, FHWA held a briefing for state DOTs regarding its contingency plans for potential HTF cash flow shortfalls as the fund has faced a continuous and structural cash flow deficit since 2008.

Cash management procedures would allocate HTF Highway Account funding reimbursements to states in proportion to their share of the total unexpended balances of all the states; however, reimbursement of the full requested amount may not be possible based on cash-on-hand.

Thus, under the cash management procedures, each state would only be able to bill against a state-specific cap, with “billing overages” being covered in the future payment cycle.

As was the case with prior HTF cash shortfalls in 2008 and 2014, reimbursement windows would be limited around the sixth and 17th business days each month, which is when the agency receives its twice-monthly deposits of tax receipts from Treasury for the HTF.

Lorie Tudor – the funding and finance committee’s chair and director of the Arkansas Department of Transportation – stressed that state DOTs need to use this “breathing room” created by the Treasury’s HTF “true-ups” to convince their respective members of Congress about the need to avoid future lapses in HTF funding.

“If there is one thing we can do and must do, it is to make our congressional delegations understand how bad it would be if FHWA had to go to cash management with HTF funds – and how that would impact our projects and contracting ability,” she said.