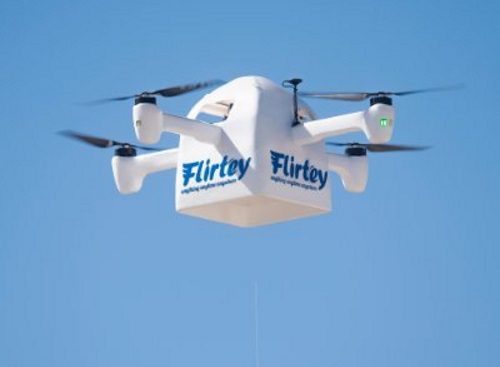 Mesa Air Group – the parent company of Mesa Airlines – recently ordered four drones from aerospace technology company Flirtey, with an option to order an additional 500 unit. Mesa said in a statement that this agreement makes it the first scheduled airline to launch a drone delivery service in the United States.

[Above photo by Flirtey]

Mesa and Flirtey said the immediate goal of their new partnership is to conduct commercial drone deliveries in the last-mile food and beverage market in the United States, with plans to expand their drone delivery service further in the U.S. and into New Zealand down the road.

To date, Flirtey’s has conducted over 6,000-drone delivery flights in the U.S. with its patented drone technology. The company noted that it builds all of its drone aircraft in the United States.

State departments of transportation across the country are also engaged in the support of drone development in a number of ways.

For example, state DOTs from Kansas, North Dakota, and North Carolina played critical roles in a drone research initiative launched by the U.S. Department of Transportation in November 2020 dubbed the BEYOND program – an effort building off the agency’s three-year long Unmanned Aircraft Systems Integration Pilot Program (UAS IPP) that wrapped up in October 2020.

“Drones are going to be an increasingly important part of our transportation system, and we need to make sure our state and our country are ready for them,” explained Eric Boyette, North Carolina’s transportation secretary, in a statement at the time.

The North Carolina Department of Transportation recently completed two successful trial flights of a delivery drone from Hatteras to Ocracoke Island in July.

New York-based nonprofit NUAIR, which manages that UAS corridor, will help the consortium establish an “experimentation hub” offering more than 100 square miles dedicated to beyond visual line of sight or BVLOS testing and long-range flight paths for drones along that passageway.

Meanwhile, at the federal level, the Federal Aviation Administration and Skyward – a Verizon-owned company – recently signed a three-year memorandum of agreement or MOA to test cellular-connected drones.