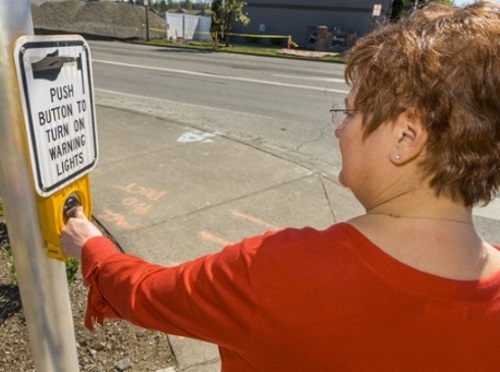 Over the next two years, the Oregon Department of Transportation plans to install more than two dozen new rectangular rapid flashing beacons – known as pedestrian activated beacons – to help improve safety for pedestrians along major traffic corridors in the Portland area and statewide.

Those rectangular rapid flashing beacons give people walking, rolling, or biking an additional level of control over the traffic they face, the agency explained – activating flashing lights that alert oncoming motorists to people crossing the road.

The Oregon DOT said it started using such beacons on Portland area roads a decade ago and found them to be an effective tool for improving pedestrian safety on busy traffic corridors – especially in areas with long distances between traffic signals.

They provide an additional layer of safety and assurance for anyone crossing a busy road and play an especially important role in economically disadvantaged neighborhoods, areas with higher rates of pedestrian injuries, the agency noted in a statement.

In the past two years, the Oregon DOT installed 18 pedestrian activated beacons around the region, including on Southwest Barbur Boulevard (OR 99W), Tualatin Valley Highway (OR 8), Southeast Powell Boulevard (U.S. 26), and OR 211 in Molalla. In the next few years, the agency expects to install 25 more in all three Portland area counties, including 10 on Southeast Powell Boulevard.

Many other state departments of transportation are deploying similar technology to improve pedestrian safety as well.

For example, the Georgia Department of Transportation is using what are known as “hybrid beacons” to improve crosswalk safety for pedestrians.

Also known as the High intensity Activated crossWalK or HAWK, these beacons are pedestrian-activated warning devices located on the roadside or mounted on “mast arms” over mid-block pedestrian crossings signal both drivers and pedestrians attempting to cross a street.

Such devices are also part of a sweeping set of changes proposed by the Federal Highway Administration in late 2020 to the Manual on Uniform Traffic Control Devices or MUTCD – changes the American Association of State Highway and Transportation Officials is urging the agency to keeping moving forward on.

“It has been over 10 years since the last update and, during this time, numerous advancements have been made in transportation research, technology, and practice that are not yet reflected in the manual,” AASHTO noted in a May 14 letter to FHWA. [To view AASHTO’s full comments regarding the FHWA’s proposed MUTCD revisions, click here.]

“These advancements have the potential to save lives and prevent serious injuries on the nation’s transportation system,” the group said. “Rescinding the NPA [notice of proposed amendment] and starting over, as some have suggested, would negate years of important work by FHWA and countless volunteers, and would miss the opportunity to save lives now.”