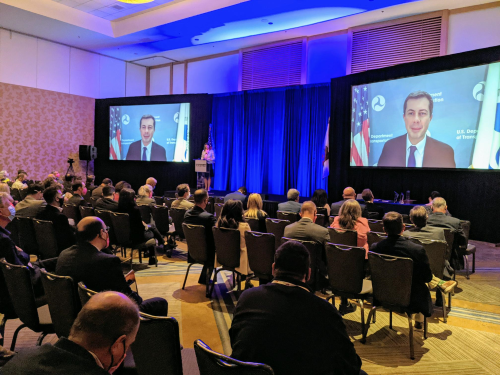 The recent National Highway Traffic Safety Administration report highlighting a record-setting spike in crash fatalities over the first six months of 2021 is serving as a “call to arms” for Pete Buttigieg, secretary of the U.S. Department of Transportation.

He explained during a speech to attendees at the American Association of State Highway and Transportation Officials annual meeting in San Diego that the National Highway Traffic Safety Administration said an estimated 20,160 people died in motor vehicle crashes in the first half of 2021, up 18.4 percent over 2020.

That is largest six-month increase ever recorded in the Fatality Analysis Reporting System’s history, NHTSA noted in a separate statement, with the agency adding that the total number of projected fatalities is the largest six-month total since 2006.

“As our partners in safety, this is bad – this is a national crisis,” Buttigieg explained during his live-streamed remarks at AASHTO’s annual meeting. “I know we have all been working these issues for years, but clearly need to do more.”

In addition to the traffic fatality data, NHTSA also released behavioral research findings that indicate speeding and traveling without a seatbelt remain higher than during pre-pandemic times.

Buttigieg added that those fatality numbers are a grim reminder that “everyone should be able to get where they need to go safely” regardless of what mode they use to travel.

“We know this means we need to change our mentality about this. No one can do it alone,” he said. “It will take all levels of government, industries, advocates, engineers, and communities across the country working together. We must together start a new and urgent era of action.”

“The data released by NHTSA on the continued jump in traffic fatalities is more than troubling – it’s a crisis for our communities,” noted Jim Tymon, AASHTO’s executive director.

“One life lost on our roadways is one too many and should spur us to redouble our efforts and reconsider how we deal with this emergency,” he added.

“State departments of transportation have focused on roadway fatalities for decades and are committed to continue this work with USDOT and welcome Secretary Buttigieg’s leadership to address this head-on,” Tymon noted. “AASHTO looks forward to strengthening partnerships with our industry colleagues in this fight against traffic deaths.”

Buttigieg added that USDOT plans to create its first National Roadway Safety Strategy in order to “significantly reduce roadway deaths,” he said. That new strategy document – expected to be released in January 2022 – will outline a “comprehensive set of actions” to significantly reduce serious injuries and deaths on our nation’s roadways, rooted in the “Safe System Approach” principles.

Buttigieg also emphasized during his remarks that he is “impressed” by what state DOTs do in terms of developing multimodal transportation options – including protected bikeways and dedicated bus lanes.

“The leadership coming from state DOTs is unsung and underappreciated,” he said. “We’re racing to catch up with the dynamics shown by state DOTs as we all know not all the [transportation] answers should come from Washington [D.C.]. We will work with you every step of the way to ensure we are getting it right. And if we get right with the dollars you and I are responsible for, the 2020s will be extraordinary.”