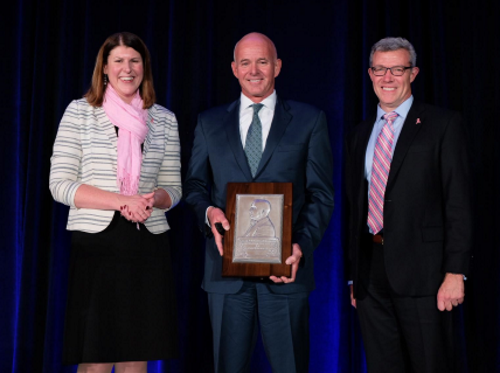 The American Association of State Highway and Transportation Officials presented several awards during its annual meeting in San Diego to Carlos Braceras (in middle of above photo) – 2018-2019 AASHTO President and Utah Department of Transportation executive director – former AASHTO Executive Director Bud Wright, and seven other individuals, teams, and programs for outstanding achievement in the field of transportation.

“These award recipients represent a wide range of backgrounds and expertise,” said Jim Tymon, AASHTO executive director, in a statement.

“But the one thing all these winners have in common is a commitment to bringing new ideas to life in the transportation field through hard work, ingenuity, and perseverance,” he added. “These are true role models who exemplify what it means to dedicate yourself to public service.”

The awards and honorees are:

Ohio DOT won the award for its collaboration with the Ohio State Highway Patrol to create the state’s first distracted driving safety corridor to reduce distracted driving-related crashes, injuries, and fatalities on one of the busiest interstates in Ohio.

Established in 1979, this award recognizes outstanding and exemplary contributions to the work of the Association. During his tenure at AASHTO, Wright oversaw the development of a new strategic plan and led the organization to overhaul its entire committee structure.

Prior to joining AASHTO, Wright worked at the Federal Highway Administration for more than 30 years, including more than seven years as the FHWA executive director.

Finally, several individuals and teams also took home President’s Transportation Awards, which are presented every year to recognize excellence in selected transportation fields. The 2021 winners are: