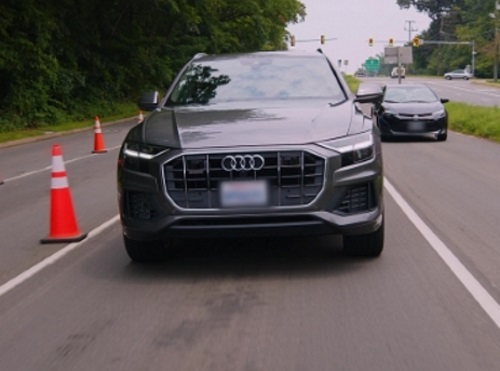 What began as an initial deployment of next-generation cellular vehicle-to-everything or C-V2X technologies is now yielding a wealth of real-world safety insights for motor vehicle drivers, passengers, and vulnerable roadside workers, according to Audi of America.

[Above photo by Audi]

The program used a specially equipped Audi Q8 development vehicle to test a range of “intuitive communications tools” to alert drivers when they are entering work zones – tools that warned them of shifting traffic patterns while visibly and audibly notifying roadside workers when vehicles are close to a work zone.

The program yielded a “red light violation warnings” function to supplement Audi’s Traffic Light Information or TLI technology that is currently available to customers at more than 22,500 intersections nationwide.

Developed in conjunction with Traffic Technology Services, Audi’s partner in developing TLI, this red light violation warning function allowed the test vehicle to sense when it would need to slow down to avoid running a red light. In future scenarios, the system could slow or stop vehicles moving in an intersection from colliding with one another.

Other C-V2X applications Audi is developing with its pilot tests include improving safety for children in school zones and while getting on and off school buses. Those features developed from an Audi C-V2X pilot test in Alpharetta, Georgia.

Through internal research, as well as publicly available data, Audi estimates there will be 5.3 million vehicles, work zones, railway crossings, bicycles, and other devices that will be able to connect to C-V2X frequencies by 2023.

Audi added that it plans to continue development with partners for additional use cases into 2022 and beyond, further refining the technology and demonstrating its importance in various use cases.