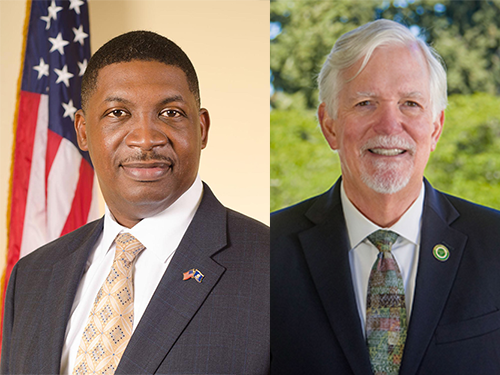 The board of directors of the American Association of State Highway and Transportation Officials elected Dr. Shawn Wilson (seen above at left) – secretary of the Louisiana Department of Transportation and Development – as its 2021-2022 president during the organization’s annual meeting in San Diego.

Dr. Wilson is the first African-American president in the association’s 106-year history.

The board also elected Roger Millar (seen above at right), secretary of the Washington State Department of Transportation, as AASHTO’s 2021-2022 vice president during its annual meeting.

“This is truly an honor that I approach with tremendous humility and excitement,” Dr. Wilson said.

“I am looking forward to an incredible year with AASHTO and the great people I’ll be working with at state departments of transportation around the country,” he added. “One of the significant advantages of serving as AASHTO president is that it gives me a platform to address issues that matter.”

Dr. Wilson said that while those numbers are improving, his presidential emphasis areas address the need to do more.

He said his primary emphasis areas – entitled “Pathways to Equity” – is designed to intentionally expand opportunities within the state DOT community by creating a culture that identifies, trains, and empowers individuals in under-represented populations covering age, gender, ethnicity, and race.

“I’m interested in how we sustain that opportunity to achieve equity,” Dr. Wilson said. “How are we, as state DOTs, building a bench of leaders that reflects the population in the communities we serve? How do we diversify, not just with race, but also with gender, with disciplines? How do we change what we do as a department of transportation in a way that opens up the opportunity to recruit and retain a more capable, qualified, and inclusive professional workforce?”

His second emphasis area – “Partnering to Deliver” – is an AASHTO and state DOT initiative designed to create partnerships with non-traditional organizations, both transportation-related and non-transportation specific. The idea is to embrace the richness of differing perspectives represented in the broader transportation community, enhance awareness and strengthen understanding.

He graduated from the University of Virginia in 1982.