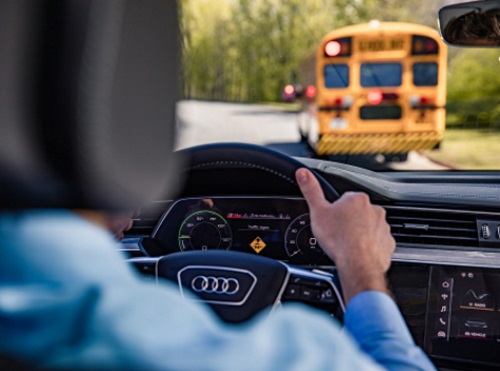 A recent study conducted by researchers at the University of Florida showed that alerts from a connected vehicle smartphone application caused drivers to reduce their speed in active school zones, while also increasing the visibility of bicyclists sharing the road with those same motorists.

[Above photo by Steven Averett for Applied Information]

Researchers collected trajectory and eye tracking data from 50 subjects who participated in the study, each making two trips around the circuit with a test vehicle and phone preloaded with the TravelSafely smartphone app supplied by Applied Information and Temple, Inc.

The study results showed that the availability of a connected vehicle app decreases the probability of speeding in school zones and increases visual scanning behavior. These could translate into improved situational awareness and increased safety in school zones, according to a summary of findings.

In the case of the bicyclist, the results showed a significant increase in the probability of seeing the bicyclist with the availability of the app, according to a statement from the study’s researchers.