Making ROWs a Source of Opportunity, Not Hassle 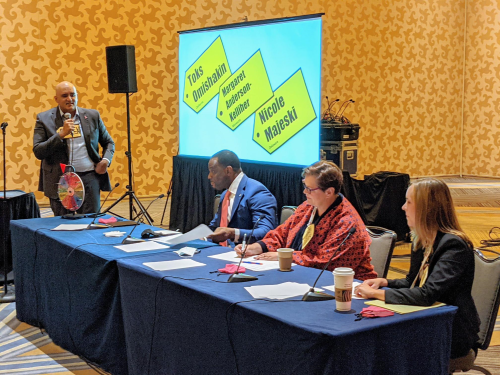 A session held during the annual meeting of the American Association of State Highway and Transportation Officials explored ways to make right-of-ways or ROWs maintained by state departments of transportation a source of opportunity instead of just an operational expense.

In the past, state DOTs typically viewed right of ways as a hassle – a place for mowing and picking up trash,” explained Shailen Bhatt, the session moderator, who works for global infrastructure consulting firm AECOM.

“But now, with new innovative approaches such as using ROW for broadband expansion, what was once a source of frustration is now becoming a source of revenue for state DOTs,” he said.

“We are very supportive [of ROW] efforts as long as they are conducted in a safe manner and do not interfere with highway operations,” he said. “There are two methods to accommodate ROW projects – either via use as a utility or the alternative use of right of way statute. We encourage states to accommodate ROW projects as a utility as much as possible so they do not have to go to their respective FHWA division offices for [project] approval.”

Toks Omishakin, director of the California Department of Transportation, said his agency is using ROWs to address the housing challenges of his state’s homeless population, which now numbers north of 160,000 people.

“Our [state] budget allocates $12.2 billion over three years to address this issue,” he said. “In the Oakland area, we’ve built temporary cabins – what we call ‘Mandela Homes’ – for the homeless on right of ways. They also function as mini-employment centers offering help finding jobs.”

Finally, Omishakin said Caltrans is pushing ahead with a broadband expansion effort that would impact 8,100 miles of “middle mile” ROW locations statewide.

Margaret Anderson Kelliher, commissioner for the Minnesota Department of Transportation, said the next generation of highway projects is looking at using ROW for electric power transmission as well.

“We are also looking at putting solar power in right of way, to get community credits and ‘solar gardens’ going,” she said.

“We are offsetting 24 percent of our [Minnesota DOT’s] energy use via this solar power effort,” Kelliher added.

She also stressed that developing such “alternative uses” of ROW is especially important for the local communities near them, not just the state DOT. “Developing right of ways to provide localized benefits then helps us to forge better partnerships with local communities as well,” Kelliher said.

Nicole Majeski, secretary of the Delaware Department of Transportation, noted that even though her state is unique as it directly owns 90 percent of all roads and bridges and thus 90 percent of all ROWs, Delaware is still in early stages of planning new ROW uses.

“We need legislation to expand right of way use and to bring more partners in for such projects,” Majeski noted. “In our rural areas we especially struggled to provide education for children due to COVID-19 stay at home restrictions as we had no broadband network. Now Delaware is investing $100 million over two years through public private partnerships.”

However, she said that not everyone loves such ROW projects. For example, Majeski pointed to projects placing small cell towers and wind farms in ROW land. “Everyone wants such technology, but, when reality comes and the pole or wind farm obscures the [homeowner’s] view, it changes everything.”

Yet she emphasized that state DOTs are proving themselves key partners in ROW development plans aside from being the mere owners of those spaces. “The main reason state DOTs are at the forefront is that we can deliver projects,” Majeski said. “We implement projects; that is what we do. It’s all about how to identify project gaps and then get it done.”