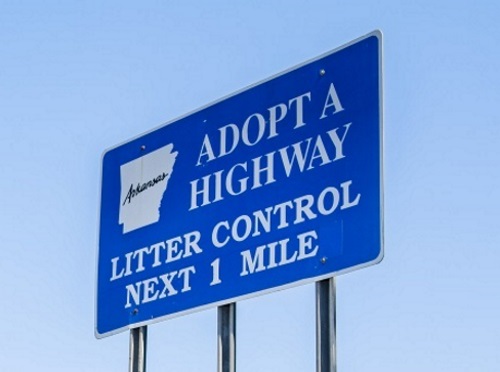 [Above photo by the Arkansas DOT]

“As we approach the holidays and increased travel, we want to ensure our roadways are safe from the harmful effects of litter,” explained Clay Bright, the former commissioner of the Tennessee DOT, in a statement.

“Whether intentional or unintentional, litter on our roads impacts safety, the environment, and the economy, while also detracting from the state’s natural beauty,” he added. “We are grateful for our many partners across the state coming together to help prevent and reduce litter.”

[Editor’s note: Governor Bill Lee (R) recently named Bright to serve as the CEO of the Megasite Authority of West Tennessee, with Joe Galbato – the current chief of the bureau of administration for the Tennessee DOT – stepping in to serve as interim commissioner.]

The Tennessee DOT and Nobody Trashes Tennessee recently launched “No Trash November,” a month-long statewide initiative encouraging state residents to participate in cleanup events in their communities, in partnership with Keep Tennessee Beautiful and Adopt-A-Highway groups.

“We are rallying our local Keep America Beautiful affiliates to participate in the first-ever No Trash November campaign to help reach the goal to remove 20,000 pounds of litter from our roads,” said Missy Marshall, executive director of Keep Tennessee Beautiful.

Meanwhile, the Arkansas Department of Transportation is beefing up its “Keep It Clean, Arkansas” anti-litter campaign with the addition of a new educational video.

ARDOT launched its refreshed campaign in October at the Arkansas State Fair, providing information to those interested in taking a proactive approach to litter and wanting to get involved with the Adopt-a-Highway program, which sponsors more than 900 volunteer cleanup groups statewide.

“People may not realize it, but long-term damage occurs when litter hits the highway,” explained Holly Butler, executive assistant for the agency’s public information office, in a statement. “Trash doesn’t just stay on the side of the road. It also gets washed into nearby rivers, lakes and streams, and pollutes waterways and aquatic habitats.”

[Editor’s note: In April, the Tennessee Aquarium opened a pair of new exhibits funded by the grants from the Tennessee DOT to illustrate how microplastics and other roadside trash can negatively affect the health of the ocean as well as rivers, lakes, and streams.]

Arkansas has the 12th largest highway system in the nation with more than 16,000 miles of roadway to maintain and keep litter-free. However, for every one mile of road, Arkansas averages 2,000 pieces of trash – adding up to almost 32 million pieces of litter each year and costing the agency $5 million annual to remove it.

Finally, the Arizona Department of Transportation provided an update on the roadway debris-removal prowess of its Incident Response Unit or IRU, started up two years ago with sponsorship by State Farm.

“Litter is an ugly problem anywhere and objects in the roadway can cause serious and even fatal incidents,” said David Blue, Arizona DOT’s IRU manager, in a statement. “Our job is to respond as rapidly as possible to get the driving surface clear and make sure conditions are safe for everyone.”