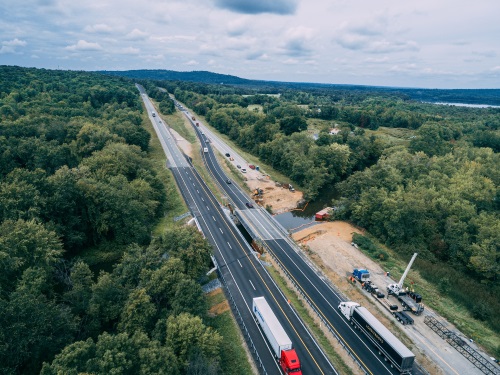 A $100 million Maine transportation bond measure unveiled by Governor Janet Mills (D) in May received voter approval on November 2, with 71 percent of voters supporting the borrowing package at the polls, according to news reports.

[Above photo by Maine DOT]

The bond measure dedicates $100 million to maintain and upgrade Maine’s transportation system through the Maine Department of Transportation, while setting aside $40 million over four years to conserve lands and waters for Maine people through the Land for Maine’s Future or LMF program.

“On behalf of the nearly 1,700 dedicated and hardworking team members at the Maine Department of Transportation, I want to thank Maine voters for approving Question 2 today,” noted Maine DOT Commissioner Bruce Van Note in a statement. “We are fortunate that Mainers historically have shown overwhelming support for transportation funding, and this year is no different. We never take that support for granted.”

He added that the $100 million general obligation bonds connected to Question 2 would trigger up to $253 million in other investments from federal, local, and private partners.

“Combined, this funding represents about 40 percent of what Maine DOT spends on transportation funding every year,” Van Note said. “These dollars are critical to our mission. Without these funds, we simply could not do our job for the people who live, work, and travel in Maine.”

That funding also comprises a critical part of the agency’s three-year work plan – issued in January – which contains 2,180 individual work items with a total value of $2.71 billion, with nearly $1.4 billion for highway and bridge capital projects.