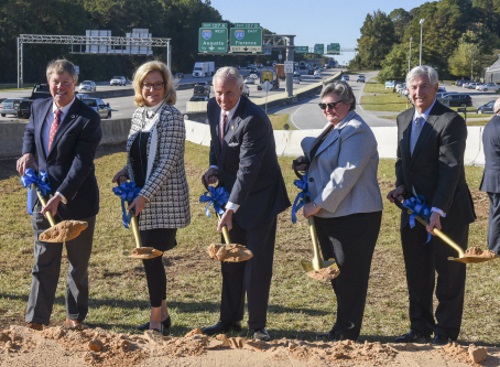 The South Carolina Department of Transportation held a groundbreaking ceremony for its Carolina Crossroads interstate improvement project on November 8.

[Above photo by SCDOT]

The five-phase $1.7 billion infrastructure project will build 43 new bridges, reconstruct seven interchanges, and improve capacity in a 14-mile stretch of Interstates 20, 26, and 126 in the Midlands over the course of nine years.

“You’ll see roadwork within the next two weeks starting to happen out here, and then it’ll just keep building every two years going forward,” explained SCDOT Secretary Christy Hall during the event.

This particular interstate corridor – originally built in 1960 – also experiences more crashes than any other highway system across South Carolina, according to SCDOT.

“Malfunction Junction has been known for years as a major pinch point in our state,” Hall added. “An estimated 112 hours per year are wasted by each person sitting in traffic at this bottleneck and it is time to relieve this daily traffic jam in order to better serve the people, businesses, and freight needs of our great state.”