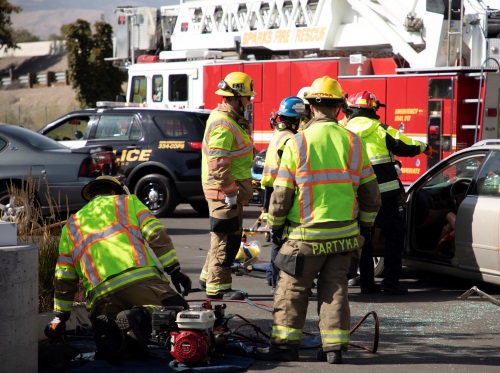 A number of state departments of transportation across the country supported a national campaign to mark Crash Responder Safety Week November 8-14.

[Above image via the Nevada DOT]

Crash Responder Safety Week is a national effort to both protect responders who are at the scene of highway crashes and remind the public of their responsibility to use caution when driving near roadside incidents involving emergency personnel.

“The free training also allows responders to step back from the job of helping others to make sure they know the best practices to protect themselves,” she said in a statement.

“NHTSA encourages all responders to complete this vital training and learn important strategies for protecting themselves on the job,” added Steve Cliff, acting administrator for the National Highway Traffic Safety Administration.

“When you’re driving and see first responders on the side of the road, remember: Slow Down, Move Over, Be Safe,” he said.

“Thousands of first responders and highway workers put their lives on the line every day to help us,” noted Craig Thompson, secretary of the Wisconsin Department of Transportation, in a statement.

He noted that, every year, an average of 136,000 traffic crashes happen throughout the State of Wisconsin – and many of them create a need for emergency response because of property damages or urgent medical needs.

“We can help them too, every time we get behind the wheel,” Thompson added. “Always eliminate distractions, mind your speed and watch for roadside incidents.”

Wisconsin DOT’s “Transportation Connects Us” podcast also shared the survival stories of three crash responders either hit by a vehicle or involved in extremely narrow escapes with traffic.

The Maryland Department of Transportation and other state agencies collaborated on a new video explaining common emergencies encountered by motorists with suggestions on how to navigate them safely.

The New Jersey Department of Transportation not only highlighted its leading role in providing TIM training to responders statewide, it also showcased a bumper sticker and poster campaign launched in June to raise public awareness of the state’s “Slow Down, Move Over” law.

The Nevada Department of Transportation and Nevada Highway Patrol (NHP) joined forces to remind motorists to drive attentively, slow down and move over for traffic response vehicles as part of the weeklong national campaign.

“When you see flashing lights on our roadways, please slow down and move over,” NHP Colonel Anne Carpenter said in a statement.

“Remember that first responders, Nevada DOT workers, tow truck drivers, and motorists with their hazards on, are all people who have loved ones who want to see them make it home safely,” she added. “Be alert, be aware and slow down – lives are on the line, and it might be your loved one who needs that courtesy one day. We are all in this together.”

The Alabama Department of Transportation reemphasized its ongoing work with other emergency responders during the week to increase safety and efficiency when clearing highway incidents. The agency estimated that the likelihood of a secondary incident increases 2.8 percent for every minute that the primary incident continues – and, often, the secondary incident is more severe.

“Some drivers believe they should wait until the police arrive and make a crash report before moving their vehicle, but this is not true and actually puts them, their vehicle and other people’s lives at risk,” said Allison Green, the ‘Drive Safe Alabama’ coordinator for the Alabama DOT, in a statement.

“Traffic Incident Management responders are often the heroes of our highways, saving lives every day,” she added. “But everyone has a role in making traffic incident management work.”