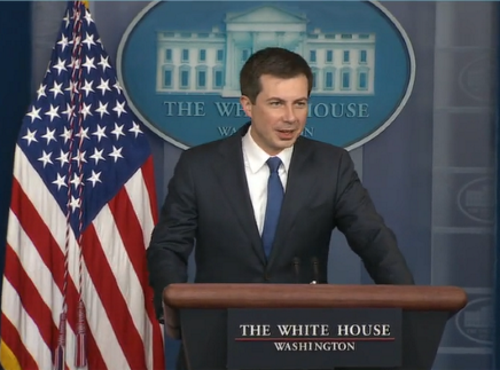 Briefings held by the leadership of the U.S. Department of Transportation on November 8 and 9 outlined the key priorities the agency intends to focus on once President Biden signs the “Infrastructure Investment and Jobs Act” or IIJA into law, expected to occur on November 15.

Pete Buttigieg (seen above), USDOT secretary, noted in a November 8 White House briefing that his agency will focus on supporting projects that deliver “economic strength, safety, climate, equity, and preparing for the future – and we see a lot of projects that overlap in that sense.”

For examples of projects falling into those categories, Buttigieg pointed to the 24 projects in 18 states that received $905 million via the Infrastructure for Rebuilding America or INFRA discretionary grant program in July.

“Then, there are areas where we have to stand up whole new programs,” he added. “Safe Streets for All – we’ve never had a multibillion-dollar safety initiative like that. And Reconnecting Communities, which we’ve been talking about all year, is responding to where sometimes it was federal dollars that divided a community, often along racial lines.”

Buttigieg emphasized that “I’m still surprised that some people were surprised” when he noted that if a highway was built for the purpose of dividing a white and a Black neighborhood, that it “obviously reflects racism” went into those design choices.

“I don’t think we have anything to lose by confronting that simple reality,” Buttigieg said. “And I think we have everything to gain by acknowledging it and then dealing with it, which is why the Reconnecting Communities is something we want to get to work right away putting to work.”

Polly Trottenberg, deputy USDOT secretary, noted in a November 9 video conference briefing that the agency will need to expand in order to handle the demands of those and other new programs authorized by the IIJA.

Trottenberg also noted that passage of the IIJA represents in her view a “transformational moment” in American transportation history.

“There is a focus on climate change and equity that I’ve never seen before in my time with government,” she said.

“I feel like there is a growing recognition we need to transform the system so it is focused on preservation and is less carbon intensive,” Trottenberg noted. ” And in doing so we will do more to foster equity, with new provisions that allows us to think about the linkage between [transportation] planning and housing, for example. The industry is thinking differently now.”