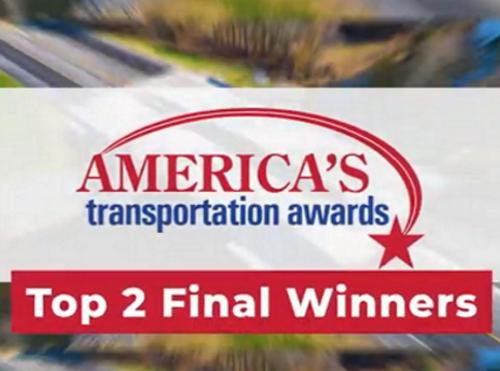 The Kansas DOT won the People’s Choice Award, receiving the highest number of online votes weighted to state populations, while an independent panel of industry judges selected NCDOT as the competition’s the Grand Prize winner. Both agencies received their awards at AASHTO’s 2021 annual meeting in San Diego.

AASHTO, AAA, and the U.S. Chamber of Commerce sponsor the American’s Transportation Awards contest, which seeks to recognize the effort and dedication that goes into planning, building, operating, and maintaining America’s vast multimodal surface transportation network.

The Grand Prize and People’s Choice awards each come with $10,000 cash prizes to be used to support a charity or transportation-related scholarship program of the winning states’ choosing.

Governor Laura Kelly (D) noted that pledges from Kansas DOT’s transportation-industry partners would boost that $10,000 charity award to more than $30,000, which – in collaboration with the Kansas Board of Regents – the agency plans to direct towards supporting transportation-related scholarships at state universities.

Meanwhile, the NCDOT is donating its $10,000 award to the non-profit Creative Corridors Coalition in Winston Salem, to ensure that transportation projects reflect the city’s devotion to arts and culture.