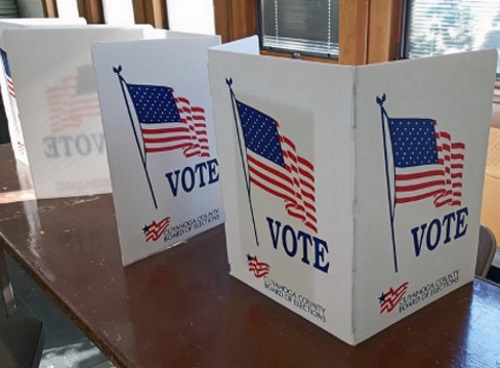 At the state and local level, voter support remains strong for a range of transportation funding efforts, according to post-election analysis conducted by the American Road & Transportation Builders Association.

[Above photo by Tim Evanson]

According to ARTBA’s Transportation Investment Advocacy Center or TIAC, voters in 17 states approved 89 percent or 244 of 275 the state and local transportation investment initiatives during the November 2 elections. The TIAC estimates those measures should generate $6.9 billion in one-time and recurring revenue for transportation projects.

The November 2 results are “consistent with the overwhelming public support” for transportation improvements demonstrated over the past decade, explained Carolyn Kramer Simons, the TIAC’s director, in a statement earlier this month prior to President Biden’s signing of the Infrastructure Investment and Jobs Act or IIJA into law.

“Since 2010, voters in 45 states have approved 84 percent of more than 2,600 state and local ballot measures that account for an estimated $326 billion in new and renewed revenue,” Simons noted.

In Ohio, voters approved 89 percent of 140 county, city, and town-focused transportation infrastructure measures on November 2; the most of any state.

Texans also approved a statewide proposal that will permit counties to use bonds to fund transportation infrastructure projects in underdeveloped areas. Counties would repay those bonds via increased property tax revenues – authority that is currently only granted to incorporated cities, towns, and other taxing units.

Furthermore, 15 Municipal Utility Districts or MUDs in Texas received approval to issue $2.8 billion in new bonds to finance road and transportation infrastructure development for new communities on vacant land outside of city limits.

Meanwhile, in Georgia, nine out of 11 counties approved a one percent Transportation Special Purpose Local Option Sales Tax, which will collectively generate $870 million in new or renewed revenue for the next five years.

Finally, in Maine, voters endorsed a $100 million bond for multimodal projects by a 72 percent to 28 percent margin, marking the 10th time transportation infrastructure investment received voter approval in Maine since 2010.

“Combined, this funding represents about 40 percent of what Maine DOT spends on transportation funding every year,” noted Bruce Van Note, commissioner for the Maine Department of Transportation, in a statement.

“These dollars are critical to our mission,” he added. “Without these funds, we simply could not do our job for the people who live, work, and travel in Maine.”