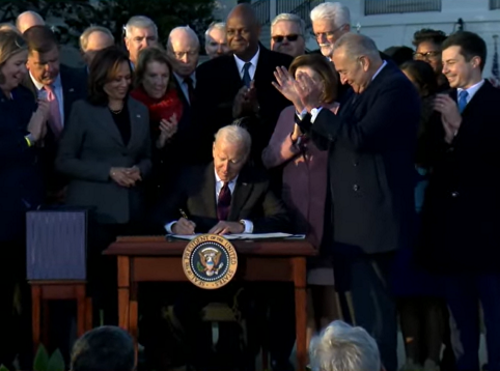 An executive order issued by President Biden on November 15 during the signing ceremony for the $1.2 trillion Infrastructure Investment and Jobs Act or IIJA lays out six priorities the administration expects to follow during the legislation’s implementation.

[Above photo of signing ceremony via White House video feed]

“The world has changed and we have to be ready,” said President Biden during the bill signing at the White House.

“For too long we have talked about having the best economy in the world, the best roads, ports, and airports,” he said.

“And today we are finally getting this done. My message is this: America is moving again and your life is going to change for the better,” the president added. “Things are going to turn around in a big way.”

The president also named Mitch Landrieu – a former mayor New Orleans and Lt. Governor of Louisiana – as senior advisor responsible for coordinating the implementation of the infrastructure law on November 14 ahead of the White House bill signing ceremony.

“Our work will require strong partnerships across the government and with state and local leaders, business and labor to create good-paying jobs and rebuild America for the middle class,” Landrieu said in a statement.

“We will also ensure these major investments achieve the President’s goals of combating climate change and advancing equity,” Landrieu added.

The U.S. Department of Transportation also outlined in a pair of briefings leading up to the IIJA’s signing that it plans to support projects funded by the new law that deliver “economic strength, safety, climate, equity, and preparing for the future.”

For example, USDOT Secretary Pete Buttigieg noted during a November 8 briefing that the 24 projects in 18 states that received $905 million via the Infrastructure for Rebuilding America or INFRA discretionary grant program in July exemplify the types of projects his agency aims to support through the IIJA.

Jim Tymon, executive director of the American Association of State Highway and Transportation Officials, praised the signing of the IIJA into law for providing “much-needed long-term investments” in the nation’s infrastructure.

“State departments of transportation applaud Congress and the President for getting this important piece of legislation to the finish line, as it provides historic funding increases for federal highway, transit, highway safety, and rail programs and directly addresses equity, climate change, system resiliency, bridge investment, and project delivery and environmental review processes,” Tymon said in a statement.

“AASHTO and state DOTs look forward to working with our partners at USDOT to implement the law as soon as possible,” he said. “State and local transportation agencies are eager to get to work on the multi-modal projects that will provide real benefits to the people of every community across the country.”

A recent state DOT survey conducted by AASHTO highlighted the numerous short- and long-term economic and quality-of-life benefits poised to flow from the IIJA. That survey polled state DOTs from across the country as to how the proposed policy and funding outlined in the IIJA would help them improve the safety, efficiency, and productivity of the transportation systems they manage.